Specialist police divers have spent the weekend searching a small stretch of the River Tyne in Newcastle, in the search for a missing 59-year-old from Ponteland.

Sally Allan left her home in Errington Road, some time after 3am on Boxing Day.

Three hours later, CCTV cameras in central Newcastle, captured her walking quickly from West to East behind the Copthorne Hotel. It's believed she made the journey all on foot.

Footage also shows Sally walking alongside the River Tyne underneath the Swing Bridge on Newcastle Quayside at around 6.15am on Boxing Day.

She was seen making her way along the riverside towards the rear of the Guildhall, and there is no CCTV evidence of her leaving the area.


Northumbria Police say specialist marine units have spent the weekend, concentrating their search on a small section of the River Tyne.

Chief Inspector Steve Readdie said: "This is an incredibly difficult time for Sally's family and I know they have been overwhelmed by the level of support shown by the public.

"We have been reviewing CCTV footage alongside the family. This footage has led to our search efforts being concentrated on a small stretch of the river Tyne at the Swing Bridge.

"Our marine unit will continue to search in the water, and along the river banks, for any sign of Sally or any clues that could help trace her whereabouts.

"Enquiries are continuing today and we will continue to support the family at what is an understandably distressing time."

Meanwhile, the Search 4 Sally group now has over 5,000 members.

Hundreds of people turned out to take part in a search of the area around Ponteland and Darras Hall.

The hashtag #search4sally's being used on social media, with Sally's picture and description being circulated across the region in the hopes of a sighting.

She is described a white woman, 5 ft 7" tall, slim build, with short silver/grey hair and may be wearing gold rimmed glasses.  She is believed to be wearing pink pyjamas, cream coloured fleece and cream coloured Regatta waterproof anorak.

It is out of character for Sally to go missing and her family are worried about her. 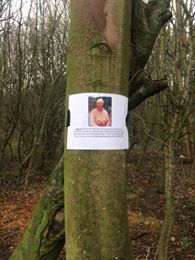 Anyone with information is asked to contact Northumbria Police on 101.