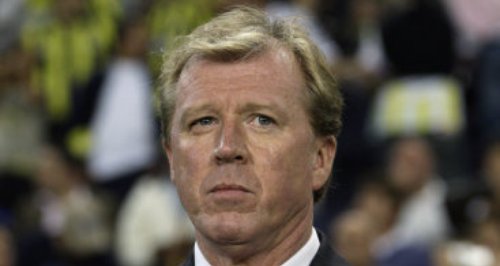 Steve McClaren has finally been announced as Newcastle's new head coach six months after initially being offered the job.

The Magpies, who parted company with John Carver and Steve Stoneon Tuesday, announced on Wednesday evening that the 54-year-old has been installed as Alan Pardew's permanent replacement after signing a three-year contract which could eventually be extended to eight.

'From my first meeting with Steve, I knew he was the perfect fit for Newcastle United. I am delighted that we have secured the services of one of the best coaches in English football.'

McClaren has been handed the challenge of securing a top-eight finish in the Barclays Premier League and to aim for a first trophy for the club since 1969.

'Steve has been tasked to secure a top-eight finish in the Premier League and he is also heavily incentivised to try to win a cup competition.

'We recognise supporters' strong desire to win a trophy, an ambition which the club now shares, as Mike Ashley made clear in his comments on the last day of the season. Steve is excited by this and he has our full support in trying to achieve this goal.

'Our immediate focus will be on working with Steve to assess and improve upon our playing squad, as well as appointing individuals to his backroom staff.''

Former England boss McClaren was identified as the club's top target within weeks of Pardew's departure in January, but opted at that point to remain at Derby and see through the club's bid for promotion to the Barclays Premier League.

Ultimately he was to fall short in that quest for the second successive season, but another more urgent approach proved equally fruitless when Newcastle came calling again in May in desperate need, with just three games of their own unravelling campaign remaining.

However, they finally got their man after investigating a series of possibilities - Frenchman Remi Garde was an early candidate and compatriot Patrick Vieira's representatives also received a call - were considered.

'I am privileged to be appointed head coach of Newcastle United FC. This is a big club with a wonderful heritage.

'St. James' Park is like a cathedral on a Saturday afternoon, a symbol for the city, and I am excited to be given this opportunity. I know how important Newcastle United is to the city and the region.

`The supporters are some of the most loyal, passionate and devoted in the world. Despite everything, they maintain their faith. We owe it to them to do everything we can to reward them with success.

`There's a lot of work to do but the club has made it clear about wanting success, and I would not have come here if I didn't believe they were serious. This club has waited far too long to win a trophy. That's one of my primary objectives here.

`I've already won trophies as a manager and a club the size of Newcastle United should be winning cups and finishing in the top eight in the Premier League.

`I'm determined to give the supporters of Newcastle United a team they can be proud of. The hard work starts now.'

The club now faces the task of rebuilding and re-invigorating a squad which stumbled through last season and very nearly over a precipice as a perfect storm of poor recruitment, indecision, injury and suspension threatened to engulf it.

Owner Ashley has already indicated he will invest heavily this summer, and while McClaren will have only a partial role to play in that process, along with Charnley and chief scout Graham Carr, the success or otherwise of that mission could go a long way towards determining his fate on Tyneside.

Ashley, whose dysfunctional relationship with the club's fans has plumbed new depths in recent months, has insisted he is going nowhere until he has won something and ended a wait for silverware which currently extends to 46 years.