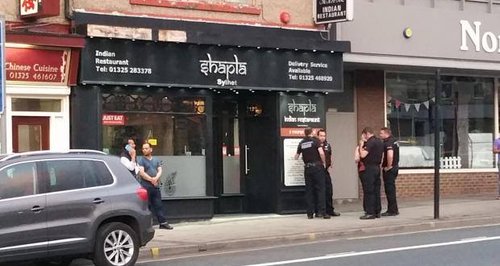 Two men have been stabbed at a Darlington restaurant.

It happened at around 8.20pm at Shapla Tandoori Restaurant on Northgate.

One of the injured men, aged 17, was taken to Darlington Memorial Hospital with serious abdominal injuries where his current condition is described as serious but stable.

The other injured man, aged 39 and from Darlington, was also taken to hospital where he was treated for injuries to his arm.

Police arrested a 43-year-old local man on suspicion of attempted murder, shortly after the incident.

The man currently remains in police custody where he is being interviewed by detectives.

'This is a shocking incident which took place in a restaurant which was open to the public at a peak time.

'With this in mind I am keen to hear from anyone who saw or heard anything at the time of the incident.

'We are treating this very much as an isolated incident and scene preservation remains in place to allow for forensic examination.'