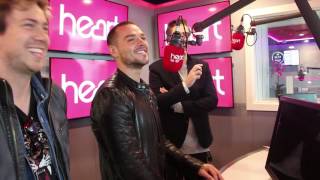 Busted were super excited about returning to the Newcastle Arena after having spent 11 years apart, expecting it to definitely be the LOUDEST gig on their tour!

However, as it's been 11 years since Busted split up, Heart Breakfast's Justin & Kelly knew loads of things would have changed for James, Matt & Charlie. Find out what the band have been up to since the split and what's in the future for Busted:

Justin & Kelly stepped their games up for Matt Willis as well. They set him a deviously difficult quiz, with a twist - he had to answer a question, with the previous question's answer. Doesn't that sound quite difficult? Watch the video above to find out...