Officers were called to an address where they found damage to the front of a property. Specialist explosives officers attended the scene in Formby Road and confirmed that a grenade had been used.

No one was injured in the attack but the householders were said to be ``extremely distressed'', said police.

Detective Chief Inspector Clare Devlin, from Greater Manchester Police's Salford division, said: ``While we are only in the early stages of our investigation, we believe this was a targeted attack and can confirm that a hand grenade was used.``Clearly this is something we are taking extremely seriously and I am sure people in the area will be hugely shocked by this news.''

He said there were a large number of officers dedicated to investigating exactly what has taken place and they will also be speaking to residents in the local area over the coming days.``Thankfully no one was injured during this attack, although the occupants of the address are understandably extremely distressed.``Make no mistake that we are going to find out exactly what has gone on here and why, and catch those responsible. This kind of violent behaviour on the streets of Salford will simply not be tolerated.'' 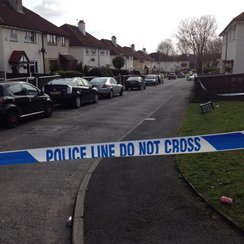 Hand grenades were used by one-eyed Dale Cregan in the murders of Pcs Nicola Hughes and Fiona Bone, and David Short in 2012. Cregan gunned down Mr Short outside his home in Clayton, Greater Manchester, in August that year before he threw a grenade at him - the first time a military grenade had been deployed in the country in that way.

While on the run for the murders of Mr Short and his son, Mark, whom he gunned down in a pub in May, Cregan lured the two policewomen to an address in Hattersley with a bogus 999 call in September. After shooting the pair, he left his ``calling card'' of an M75 grenade, which he threw on to the path where the two officers lay. A bag containing 10 M75 grenades from the former Yuglosavia was found in a storm drain in Glodwick, Oldham, in 2013. Following the discovery, Greater Manchester Police said they believed they had recovered all the grenades from Cregan's batch.

The artillery was said to have been used mainly by Serbian forces in the Yugoslav civil war in the early 1990s. M75 grenades were also reported to have been used in several attacks by an underworld crime gang in Merseyside. The gang, led by Kirk Bradley and Anthony Downes, carried out a series of assaults to order in 2009 and 2010. One grenade was launched into the home of a man when he was asleep upstairs with his partner and two children. The target later told police the explosive ''blew the place to bits'', although remarkably no-one was injured. Another grenade was left on the wall of former Liverpool football boss Kenny Dalglish, which was believed to be intended for a wealthy businessman neighbour. The grenade attacks stopped following the capture of Bradley and Downes, who were later jailed for 22 years each.