Team Abseil down Blackpool 'Big One' 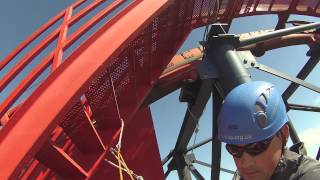 Heart News: Charity Abseil from 'The Big One'

A team of around 40, including a Chelsea Pensioner and a 90 year old Normandy Veteran have taken part in the challenge, to abseil from the 'Big One' at Blackpool Pleasure Beach.

It's all to raise money for the Army Benevolent Fund The Soldiers' Charity.

Colonel Philip Naylor OBE, Regional Director of North West ABF The Soldiers’ Charity said “We are really grateful to Blackpool Pleasure Beach for giving us this tremendous fundraising opportunity. It is the third year we have been here and so far dozens of brave fundraisers have raised thousands of pounds for the charity. I am sure the 2015 abseil will be every bit as successful and exciting”

Andy Garthwaite comments, “‘I’ve done an abseil before but that time it was with two arms so I’m quite nervous! I plan on taking in the scenery and easing down gently.

‘I’m doing it for a Charity that I absolutely love and so I can give something back. The Soldiers’ Charity is in my blood now; I don’t think twice about doing things for them. I’m one of the lucky ones who made it back alive but the charity has been such a huge help to me and my family. I’m doing the abseil to support other soldiers and veterans who have yet to have help but may need it in the years to come’.