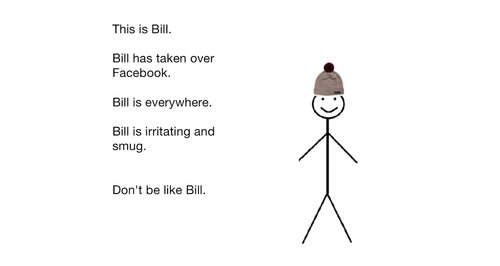 Unless you live under a rock or the British weather has knocked out your Wi-Fi, you probably know of this said Bill figure of which we speak. Not your actual neighbour Bill (although he can be annoying as well) but the stick figure Bill, you know the one with the weird beanie hat. Yep, him.

Created by a 23-year-old Moldovan man by the name of Eugeniu Criatoru (not a Bill surprisingly), the jarring meme has been circulating the Internet since 2015. But it only became really REALLY annoying recently when our Facebook friends started backhandedly complimenting themselves in the third person and ultimately, being like Bill.

Bill is irritating and smug (and he’s not even REAL!)

Bill is basically you being lectured to by a child’s drawing.

Now, lots of people are making personalised versions of the meme, using their own names instead of Bill’s to passive-aggressively call out social media behaviours that annoy them. Which is even more annoying for everyone else. (FYI, that’s not what we meant by being yourself!)

If like us you want to be banish Bill for good, here’s how…

The most effective way of banishing the pictures on Facebook is to click the little arrow in the top-right of any of the posts, when you see them. You’ll be given the option to “Hide all from” the app that has been used, and so those pictures won’t be shown again. Result!

To conclude: We don’t (and never did) want to keep calm and carry on – and we definitely don’t want to be like Bill!

Read More: Is This A Bear Or A Dog?