Nearly £300,000 has been left by Norman Hines - who sadly passed away last year

His generous legacy, which included cash, investments and a bungalow, came as a complete surprise to the staff who are working on the development of the city’s brand new cultural and heritage centre.

Many of them knew Norman who was a regular visitor to the Museum and Art Gallery, Plymouth and West Devon Record Office and South West Film and Television Archive for many years.
Born in 1927, Norman grew up in Plymouth with his mother, father and elder brother Roy. As a young lad in the pre-war years of the 1930s, he developed a keen interest in the ocean liners that came into Plymouth Sound and the celebrity passengers who came ashore at Millbay.
Too young to fight during the Second World War, he worked in the Royal Naval stores and with the Royal Navy Fleet Air Arm. His elder brother Roy was a bandsman in the Royal Marines and saw active service during the war.
Stacey Anderson, Archivist at The Box said: “Norman was a true gentleman and I learnt a lot about the city from my conversations with him. He had a wealth of knowledge about local and naval history. Collecting photographs linked to Plymouth’s time as an ocean liner port of call was a personal mission for him. I particularly remember one of them which was a great image of Walt Disney stepping off the Normandie in 1935.” 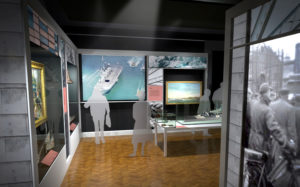 In later life Norman used his knowledge to help Plymouth City Council develop the ‘Wall of Stars’ on Millbay Road as part of the city’s ‘Waterfront Walkway’ public art trail.
He also gave talks at the Museum and Art Gallery about the famous film stars who had disembarked here and supported the development of its ‘Millbay 150’ exhibition in 2007.
Peter Smith, Deputy Leader said: “Norman was a proud Navy man and keen historian and we were very sorry to hear he had passed away. Although it’s sad to think that he died without any living descendants or siblings we are hugely appreciative of his generous donation which we’ll be investing in the development of our ‘Port of Plymouth’ gallery.
“We’re sure he’d be delighted to know that his legacy is helping us create a gallery that will tell the story of the importance of Plymouth as an international port for many years to come.”