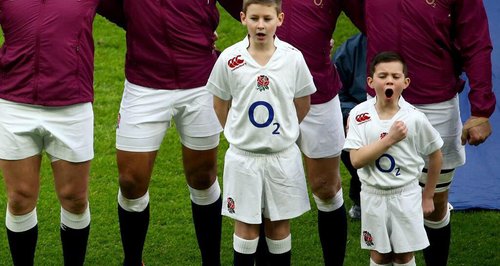 A six-year-old Plymouth schoolboy has become an online sensation for the way he belted out England's national anthem as a mascot at Twickenham.

Proud Harry Westlake gave his all as he stood in front of captain Chris Robshaw before Saturday's victory over Italy.

Millions of viewers saw him sing with passion - putting many of our stars in some sports to shame.

His stirring performance left England players and fans around the world tweeting about him, together with his family.

England and Harlequins ace Mike Brown described him as a 'legend'.

#doitlikeharry started trending on Twitter as fans praised the youngster.

Dad Kevin Westlake said: "This is my boy. He is the most passionate person I know."

Harry is a pupil at St George's Primary School in Plymouth, Devon and fell asleep as soon as he returned to his home in the city after the long journey back from Twickenham.

He met England coach Stuart Lancaster ahead of their victory over Wales, and then went on to stand in the line-up after leading the team out this weekend.

He won a competition to write 100 words on why and how he supports England rugby, which sparked his meeting with the team.