Plymouth: Watch The 'H' Drying Out 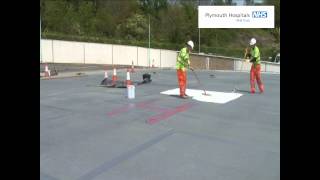 The ‘H’ has now been painted on our new helipad

The 'H' has now been painted on Plymouth Derriford's new helipad.

After nearly seven months, the official launch of our new helipad is now fast approaching and will be taking place on Friday 5th June.

The helipad is going through its final stages of completion and now has a marked letter 'H' in the centre, allowing it to be clearly visible from the air.

The ‘H’ symbolises that this is a helipad and that it is operational.

When it is not in operation, the ‘H’ is covered with a 'no fly' signal, which is a yellow cross with a red square.

Derriford Hospital is the designated major trauma centre for the peninsula and receives around 400 patients a year as emergencies needing transfer by air.

The location of the new helipad now allows access straight to the doors of our Emergency Department, therefore enabling faster transfer of patients and quicker access to emergency care for major trauma patients.

The helipad has been funded by the County Air Ambulance HELP Appeal, which has contributed £850,000 alongside £900,000 capital funding from the hospital Trust.

Watch the paint dry, on our new helipad - see the video above.