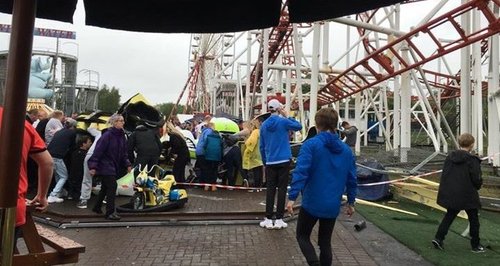 Two boys remain in a serious condition in hospital as an investigation into the cause of a theme park rollercoaster crash gets under way.

Ten people were injured after five gondolas attached in a train on the Tsunami ride detached from the rail at a bend, colliding with the main structure before falling to the ground at M&Ds Theme Park in Motherwell, Scotland.

Police, firefighters and paramedics rushed to the scene as several visitors posted images on social media appearing to show a mangled carriage on a pathway surrounded by dozens of people.

Six ambulance crews, a specialist operation team and emergency doctors attended the incident which happened at around 3.40pm on Sunday.

There were two adults and seven children on the ride at the time.

Police Scotland said a 12-year-old boy with chest, abdominal and leg injuries and an 11-year-old receiving treatment for arm and hand injuries remained in a serious condition at the Royal Hospital for Children.

A 19-year-old man has is being treated for a knee injury at Glasgow Royal Infirmary and a 19-year-old girl was treated for an injury to her wrist at Wishaw General Hospital and has since been released.

A 25-year-old woman who was passing the scene was also taken to Wishaw General Hospital for assessment and later discharged.

Detective Inspector John Malcolm said: "This is a really serious incident that has affected many people visiting the theme park and our thoughts go out to those who have been injured.

"We have now launched a joint investigation with the Health and Safety Executive and our priority is to find out the cause of the incident.''

HSE principal inspector Barry Baker said: "Our thoughts are with the children and adults who have been injured in this incident and I must give praise to the emergency services and members of the public who came to their aid so quickly.

"We have brought HSE specialists in mechanical engineering to the site to begin the process of finding out what caused the gondolas to come off the rails. HSE will work very closely with colleagues in the police as the investigation unfolds.''

According to the M&D's website, the Tsunami rollercoaster can go at speeds of up to 40mph through corkscrew turns and loops.

Children under 10 are not allowed to use the ride, and under 14s must be accompanied by a paying adult.

It is not the first time the park has had problems with its rides, including Tsunami. In July 2011, nine passengers, including children, were stranded for more than eight hours when it came to a halt 60 feet above the ground.

In March, eight people had to be rescued by firefighters in a cherry picker after the Tornado rollercoaster stopped working around 20 feet off the ground.

Police Scotland says the theme park will remain closed while the joint investigation into the cause of the crash is carried out.

Anyone who witnessed the incident, captured footage or took photographs is urged to contact the force by calling 101.