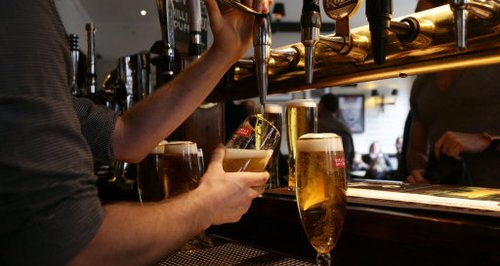 Health professionals have urged judges at Scotland's highest civil court to make a decision on minimum pricing for alcohol "wisely and swiftly''.

The group Scottish Health Action on Alcohol Problems made the plea as a legal challenge on the controversial policy was due to return to the Court of Session in Edinburgh.

Medics have long expressed their support for the policy, which was approved by the Scottish Parliament in 2012.

But the legislation, which would introduce a minimum unit price of 50p for alcohol, has been challenged by the Scotch Whisky Association and other European wine and spirits producers who claim it breaches European law.

SHAAP director Eric Carlin said the case is returning to court at a time when a new study provides "important additional support for the Scottish Government's case''.

A post by Dr Adrianna Andreangeli, a lecturer in competition law at Edinburgh University, said it is "now up to the Scottish Court of Session to be 'courageous' and consider whether this is the time to move away from the 'safety' of fiscal measures to embrace the 'brave new world' of price controls as tools of 'genuine' public interest regulation''.

The European Court of Justice has already ruled minimum pricing would breach European Union law if alternative tax measures could be introduced, and it referred the case back to the Edinburgh court.

Dr Andreangeli argued the experience of similar measures in Canada had shown these could be effective as a way of reducing "harmful alcohol demand'', as opposed to more generalised tax increases.

Mr Carlin said: "The MUP legislation has not been implemented because of the ongoing legal challenge by global producers, led by the SWA, prioritising profits over health. This new research provides important additional support for the Scottish Government's case.

"Twenty-two people die every week in Scotland because of alcohol. The Scottish medical professions have to deal with the harms caused by cheap, strong alcohol, sold for as little as 18p per unit, which devastates the lives of individuals, families and communities.

"I hope that the Court of Session will make its decision, in favour of MUP, wisely and swiftly, in the interests of the people, reducing the burden on GPs, hospital and emergency services and the distress and harms caused to Scottish people.''

Public Health Minister Aileen Campbell said: "The Scottish Government remains committed to MUP and this research adds to the wealth of evidence which supports the policy.

"We believe that MUP is the most effective pricing measure to tackle the high-strength, low-cost alcohol that causes so much damage in our communities.''