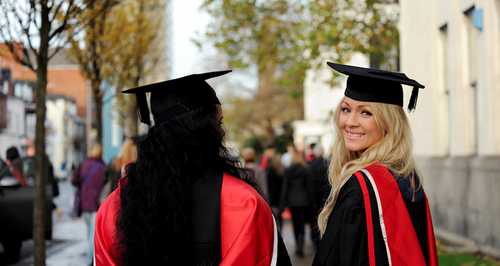 The number of students from Scotland's poorest areas going to university has fallen, new figures have revealed.

Equality data from the university admissions body Ucas showed a decline in applications from and places awarded to those from the most deprived 20% of areas.

The Scottish Government has placed a major focus on cutting the attainment gap between rich and poor, and increasing the number of Scots from the worst-off communities who make it to university.

Figures for individual universities, which were published for the first time by Ucas and which have been rounded to the nearest five, show St Andrews University placed 15 Scottish students from the poorest areas in 2015, down from 25 in 2014.

Edinburgh took on 75 students from this background in 2015, compared to 100 the previous year, while the total in Glasgow remained stable at 190. Meanwhile, the city's Strathclyde University accepted 215 students from the poorest areas, up from 200 in 2014.

While the number of successful applicants from the poorest areas fell across Scotland as a whole, there was an increase in Scots from the most-affluent communities going to university, which rose from 4,605 to 4,685 over the period.

Of those looking to start a course last October, 1,935 of the applicants who met the June 2015 deadline were from the most-deprived communities, a drop of 60 from the previous year.

The Tories, who proposed graduates should have to pay a charge of up to £6,000 after finishing their studies, claimed the new data showed the SNP administration was failing the poorest students.

"The Scottish Conservatives have been saying for quite some time that students from the most deprived areas in Scotland are being let down by the SNP government.''

A spokeswoman for Universities Scotland described the figures as being a "very useful but highly detailed and complex data set that needs further examination''.

She stated: "The one factor that underpins all of the data for Scotland is that whoever you are and whatever your background, it is a lot more competitive to get into university in Scotland than it is in other parts of the UK, and that comes down to the limited availability of places here in Scotland.

"We would like to see more funded places available at university to help ease this pressure a little and support widening access.''

A Scottish Government spokesman said: "It is extremely encouraging to see the long term improvement in the number of Scottish 18-year-olds from our most deprived areas applying to, and gaining a place at university, since 2010.

"This Government is clear that every child, whatever their background, should have an equal chance of attending university, which is why we remain committed to education based on ability to learn, not ability to pay.

"Our actions to widen access have delivered progress but we recognise there is more to do.

"The Scottish Government's Letter of Guidance to SFC (Scottish Funding Council) makes clear that there should be no let-up in efforts to widen access, and the Commission on Widening Access has set out a bold plan for achieving progress that we are determined to take forward.''

Britney Spears: Why pop singer says she is celebrating Christmas early this year

Soldier dies during training exercise on Salisbury Plain in Wiltshire