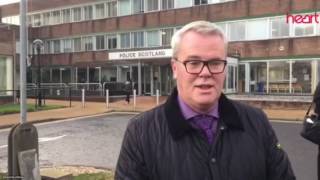 A drug addict who battered her elderly neighbour to death in a "wicked'' and "horrific'' attack has been found guilty of her murder.

Sandra Weir lashed out at pensioner Mary Logie in her own home in Leven, Fife, in January.

She had also been stealing from the 82-year-old to fund her drug habit.

Weir was found guilty at the High Court in Edinburgh on Thursday, where Judge Michael O'Grady QC described the manner of Mrs Logie's death as "breathtakingly wicked''.

The 41-year-old had denied the charges, lodging a special defence of alibi saying she was elsewhere at the time.

The trial heard the pensioner had 31 injuries to her head and neck, and died as a result of ''blunt force trauma'' to her head inflicted by a rolling pin or similar instrument .

Mrs Logie was pronounced dead at her Green Gates home on January 5.

The court heard that Weir had gotten close to Mrs Logie and had acted as her unofficial carer. It emerged, however, she had been a drug addict since her 20s and had racked up debts.

Mr O'Grady told the court Weir had attacked Mrs Logie - also known as Rae - at her home and later returned to the scene and "finished her off''.

He said: "In these courts we do not weigh the worth of victims; nor should we. All life is precious.

"But, on the evidence before me, Rae Logie was a decent, kind, tolerant and harmless elderly woman. That you should have betrayed her trust is shocking enough.

"I have no doubt then you left her for dead and went about your business. Instead, you found she was still alive and that you could not allow.

''And so, as she lay defenceless, you simply finished her off.''

"She would use coercion to obtain cash and other items of value from Mary before ultimately subjecting her to a horrific attack which left the 82-year-old with fatal injuries.

"The level of violence inflicted upon Mary, coupled with the prolonged period of bullying and intimidation, demonstrated Weir's complete disregard for the wellbeing of her victim.''

He continued: ''Mary's death had a profound impact on the local community and we are extremely grateful to the local residents who came forward with vital information that allowed us to identify Weir and bring her to justice.

"I would finally like to thank the family of Mary Logie for their continued support throughout our investigation.

"I hope that today's verdict can bring them one step closer to moving on from the traumatic ordeal of Mary's death.''

Weir will be sentenced in January next year at the same court.

Mrs Logie, who was known as Rae, was a member of Leven Parish Church in Fife.

Minister Reverend Gilbert Nisbet said: ''The end of the trial regarding the murder of Mary Logie gives an opportunity for the local community and for her family and friends to move forward.

''The evidence given and the reporting of the case in the High Court has reopened the events of last year and brought them back to the forefront of the thinking of many of the people who knew Rae best.

''There is a great deal of sadness that such a thing could happen in this community and people grieve over the circumstances of Rae's death.

''The Christian message of forgiveness is always allied to repentance.''