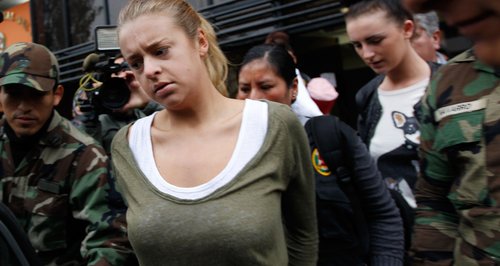 A Scottish woman jailed in Peru for drug smuggling is expected to be released later.

Melissa Reid, 22, from Lenzie, East Dunbartonshire, and Michaella McCollum, from Dungannon, Co Tyrone, were jailed in 2013 after trying to smuggle cocaine worth £1.5 million from Peru to Spain.

A judge in Lima last month granted an order to expel Reid as she met the legal requirements for release.

According to reports, the release process has now been completed.

McCollum, 23, was freed in March under new legislation but was required to remain on parole in Peru.

It is understood Reid will be able to return to the UK a free woman.

The pair were caught at Lima Airport trying to board a flight with 24lb (11kg) of cocaine in food packets hidden in their luggage.

They claimed they were forced into carrying the drugs but pleaded guilty to the charges and were sentenced to six years and eight months.

Reid's father Billy has previously said the impact of his daughter's crime on his family had been ''horrendous'' and spoke out in a video warning of the consequences of drug offences abroad.

A spokeswoman for the Foreign Office said: "We continue to provide assistance to Melissa Reid and remain in contact with her family and local authorities.''