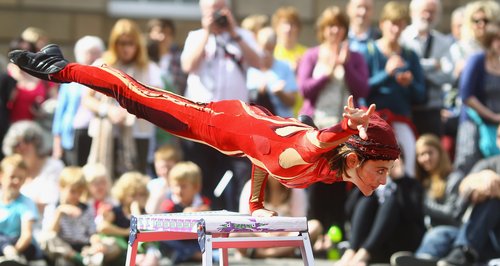 Edinburgh's world-renowned festival season is getting into full swing with the launch of three of the city's biggest events.

The Edinburgh International Festival, Festival Fringe and the Royal Edinburgh Military Tattoo all officially get under way on Friday.

August, which will also see the launch of the Edinburgh International Book Festival next week, marks the peak of the city's year-round festivals calendar and the height of its tourist season.

The International Festival kicks off on Friday evening with Bellini's opera Norma, with Italian mezzo-soprano Cecilia Bartoli in the title role. The production has won acclaim throughout Europe since its unveiling in Austria in 2013.

On Sunday, Edinburgh Castle will provide the backdrop for a spectacular show before an audience of 27,000 people. The landmark and its rocky foundation will act as a canvas for animated projections charting 350 million years of history.

The ticketed free event, called Deep Time, will be set to a specially-composed soundtrack by Scottish band Mogwai and marks the start of a three-year partnership between the EIF and sponsor Standard Life.

Overall, the programme for the three-and-a-half week EIF involves performances from almost 2,450 artists from 36 nations.

Festival director Fergus Linehan said there is a "fantastic'' atmosphere among all those involved in this year's event.

"We feel like we have three opening nights because we open our big opera on Friday - Norma from Salzburg - then on Saturday we've got our big opening concert, then on Sunday we have Deep Time and (Tennessee Williams play) The Glass Menagerie opening.

"It feels really good and the tickets are flying out the door.''

Meanwhile, more than 3,000 shows are being staged at this year's Fringe, the largest arts festival in the world.

It represents a slight decrease on the number of shows on offer in 2015 but the festival is still substantially bigger than in recent years.

Some of the famous names in the comedy line-up include Lucy Porter, Stewart Lee and Alistair McGowan.

Colin Hay, former lead singer of Men at Work, will bring a group of international musicians together for his show, while Fringe favourite Camille O'Sullivan will debut a new show featuring the music of Radiohead, Nick Cave and David Bowie.

Various theatrical performances will celebrate William Shakespeare's legacy as they mark the 400th anniversary of the Bard's death.

There will also be more than 600 free events on offer across the programme.

The 2016 Military Tattoo will host talent from around the world, as more than 1,200 performers come together at Edinburgh Castle.

The spectacle will mark the year in which the Queen turned 90 under the theme of Tunes of Glory.

The line-up of performers for the 100-minute programme includes massed pipes and drums, Tattoo favourites the Imps Motorcycle Display Team, and the Nepal Army Band celebrating their homeland and links with the UK.

The event, which is close to selling out, tends to attract an audience of around 220,000 people over its August run.

The Tattoo runs until August 27 while the 2016 EIF and Fringe draw to a close on August 29.