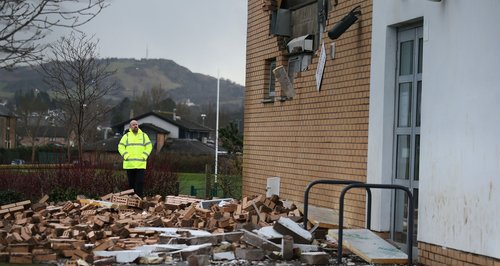 Construction defects which closed schools in Edinburgh could have implications for buildings across the UK, according to the council leader who commissioned an inquiry into the fiasco.

Children have now returned to 17 schools which were closed in April following the collapse of a wall at Oxgangs Primary.

Around 7,500 pupils and more than 600 staff had to be relocated while safety inspections and repairs were carried out.

Edinburgh City Council leader Andrew Burns said Scottish and UK ministers should scrutinise the findings of the inquiry, led by construction expert John Cole, when it concludes in December.

Similar defects in wall and header ties, which bind brick walls to the main structure, have been identified in other buildings including Lourdes Primary in Glasgow, he said.

The Labour councillor rejected opposition claims that the decision to fund the schools in a public-private partnership (PPP) contributed to the defects.

The schools were built by Miller Construction, which was acquired by Galliford Try in 2014, with maintenance provided by the Edinburgh Schools Partnership (ESP) with partner Amey BPO Services.

Mr Burns said the council will "absolutely'' be able to hold private companies accountable for the defects, which have already cost ESP many millions of pounds in withheld council payments.

He said: "We have been withholding that unitary charge for several months now, and we are talking several million pounds over the course of May to August while the schools have not been available, so there has been no cost to date to the local authority.

"There has been significant expenses in arranging buses for pupils around the city, but that has all been deducted - in effect - from the unitary charge.''

There are no indications exam results have been affected by the disruption, he said.

He added: "All of the early indications are that this was a construction issue, not a contract issue.

"There were schools closed in other parts of the country, particularly in Glasgow where Lourdes Primary shut after four years of being opened, which was built under traditional procurement, so it's not as clear cut as the type of finance.

"I think this is more of a construction issue, which is why John Cole's independent investigation in Edinburgh, I think, will have implications much wider beyond Edinburgh - probably for the whole of Scotland and the rest of the UK.''

He said Lourdes, which was not financed under PPP, had similar problems with wall and header ties.

Mr Burns added: "The Scottish Government has been very supportive, it is crucial to stress that we've kept both the Scottish and UK Government concerned about the terms of reference of the independent inquiry.

"I'm quite sure that ministers in both the Scottish and UK Government will continue to show an interest in what comes out of John Cole's investigation in due course.''

A trade union coalition has written to Scottish First Minister Nicola Sturgeon urging her to hold a Scotland-wide inquiry into PPP.

Pat Rafferty, Unite Scottish secretary, said: "We need our MSPs to seriously consider the option of cancelling or re-negotiating unfair and extortionate PFI contracts, and we need to make sure that the private finance alternatives put forward by the Scottish Government will really deliver value for money.''

Joel Benjamin, campaigner for the UK-wide campaign group People vs PFI, said: "Scotland has 40% of UK PFI schools, with just 8.5% of the UK population.''

He added: "PFI is a national scandal, the faults identified in Edinburgh can be found in schools, fire-unsafe hospitals and other public infrastructure throughout England and Wales.

"PFI is a failed model, it's time for a national inquiry to lift the lid on these secretive contracts.''

"Two cabinet secretaries dragged their heels, intimating they would review matters, but it now seems nothing is happening on this front.

"The debate about school buildings is not just about the future structure of contracts. There are other things that can happen now and the SNP should act decisively to make these changes.''

Top of the group...just about! But there are much tougher tests to come

Euro 2020: Scotland crash out after defeat to Croatia - while England top Group D