Face Off During Fishermen EU Protest 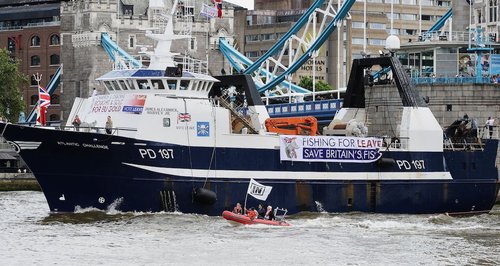 Nigel Farage has been involved in a bizarre clash with rock star philanthropist Bob Geldof on the River Thames.

The Ukip leader was joining trawlers sailing past Parliament in a protest over European Union fishing policies.

But a vessel carrying Geldof pulled alongside Mr Farage's boat and the Boomtown Rats singer unleashed a verbal broadside, calling the Brexit campaigner a "fraud''.

Mr Farage was part of a flotilla of around 30 vessels campaigning for a vote to leave the EU in protest at the Common Fisheries Policy.

Around 50 to 60 boats had originally been expected to take part in the protest, passing the House of Commons while David Cameron was answering Prime Minister's Questions.

Geldof and his Remain supporters blasted out the song In With The In Crowd from a large on-board sound system as they pulled alongside.

Addressing Mr Farage over a PA system on his vessel, the Sarpedon, Geldof said: "You are no fisherman's friend.''

He said that while Mr Farage was on the European Parliament fisheries committee he attended just one out of 43 meetings.

"You are a fraud, Nigel. Go back down the river because you are up one without a canoe or a paddle.

"Stop lying. This election is too important.''

Speaking to reporters accompanying him on the Thames, Mr Farage branded the Geldof protest "just disgusting''.

"They are here today, they have taken - some of them - several days out of their working week to come and make their protest, to say Look, we want to take back control of our seas, we want to get jobs back in this industry'.

"To see multi-millionaires frankly mocking them is a pretty shameful sight.''

Mr Farage said the protest was taking place eight days ahead of the June 23 referendum because EU membership had ``destroyed our industry''.

"The governing principle of the common fisheries policy is that of 'equal access to a common resource','' he said.

"Fish stock that should be within the UK's internationally-recognised territorial waters is now shared with our European partners. This has led to a 60% drop in oversized landings and the loss of tens of thousands of jobs in our industry.''

Jobs were also being lost in the charter angling fleet because of new EU regulations on recreational sea angling, said the Ukip leader, who added that Norway, outside the EU, was able to control stocks up to 200 miles off its shores and had a "booming'' commercial fishing and angling industry.

"Today's flotilla is not a celebration or a party but a full-throttled protest. We want our waters back.''

Greenpeace UK executive director John Sauven said: "When Nigel Farage had a chance to stand up for UK fishermen in Brussels, he bunked off. His no-show voting record proves he's no fisherman's friend but a cynical opportunist exploiting the harsh predicament of many fishermen for political gain.

"What's threatening the livelihoods of thousands of sustainable, family-run businesses is the grossly unfair division of fish quota overseen by successive UK governments. The root of the problem lies in London, not Brussels.

"Quitting the EU will only condemn the industry to years of wrangling over new fisheries agreements, with no guarantee of a better deal for fishers or stronger protections for our seas.''

Geldof said in a statement:  "The In Crowd are here to say to Farage's fishy flotilla: 'Don't sink Britain'.

"Look at the facts: Farage is no fisherman's friend. Farage had the chance to help fisherman in the EU, but only attended one out of 43 fisheries committee meetings.

"The UK gets the second biggest quota out of member states and has the biggest profit of any EU member state. Leaving Europe would be disastrous for our country, our economy, our public services and our fishing industry.''