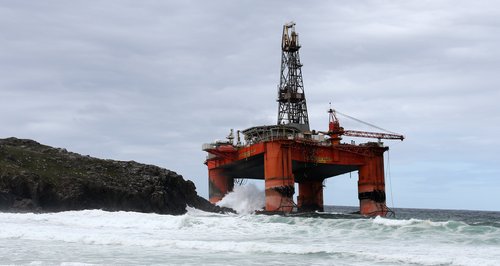 An investigation has begun into the grounding of an oil rig on the Western Isles which is believed to have leaked more than 50,000 litres of fuel.

The Transocean Winner rig was carrying 280 tonnes of diesel - more than 300,000 litres - when it was blown ashore in severe weather conditions on the western side of the Isle of Lewis early on Monday.

The semi-submersible rig detached from its tug the Alp Forward during towing from Norway to Malta and the weather prevented the line being reconnected.

Hugh Shaw, the UK Government's representative for maritime and salvage, said the "worst-case scenario'' is that about 52 tonnes, more than 50,000 litres, of oil has leaked into the environment from two breached fuel tanks.

However, no oil has been seen on the surface of the sea and Mr Shaw said most of the escaped diesel would have evaporated.

He told BBC Radio Four an air search of the coastline found "no trace of oil'' and work would continue with the salvage teams and Transocean to keep the two remaining tanks from being damaged.

A Maritime and Coastguard Agency spokeswoman said: "Salvors will determine the quantity of diesel remaining in those tanks during the course of the salvage operation.

"Diesel is a light and non-persistent oil which presents much lower environmental risks than heavy black crude oil.''

A "low level'' of pollution was detected by tests on Monday, Western Isles Council said, but daily shoreline inspections by the Scottish Environment Protection Agency have indicated no visible sign of pollution.

No-one was on board the rig when it grounded at Dalmore beach near Carloway.

People are being urged to stay away from the beach as teams continue to work and a temporary 300-metre (980ft) exclusion zone has been set up at sea.

Environmental groups have raised concerns while it is expected to take "some time'' to refloat the rig as it came ashore at high tide with a storm surge.

Scotland's Environment Secretary Roseanna Cunningham said serious questions need to be asked as to why the rig was being towed during severe weather and Deputy First Minister John Swinney had raised the point with the UK Government.