WATCH: High Winds Bring Down Front Of Block Of Flats 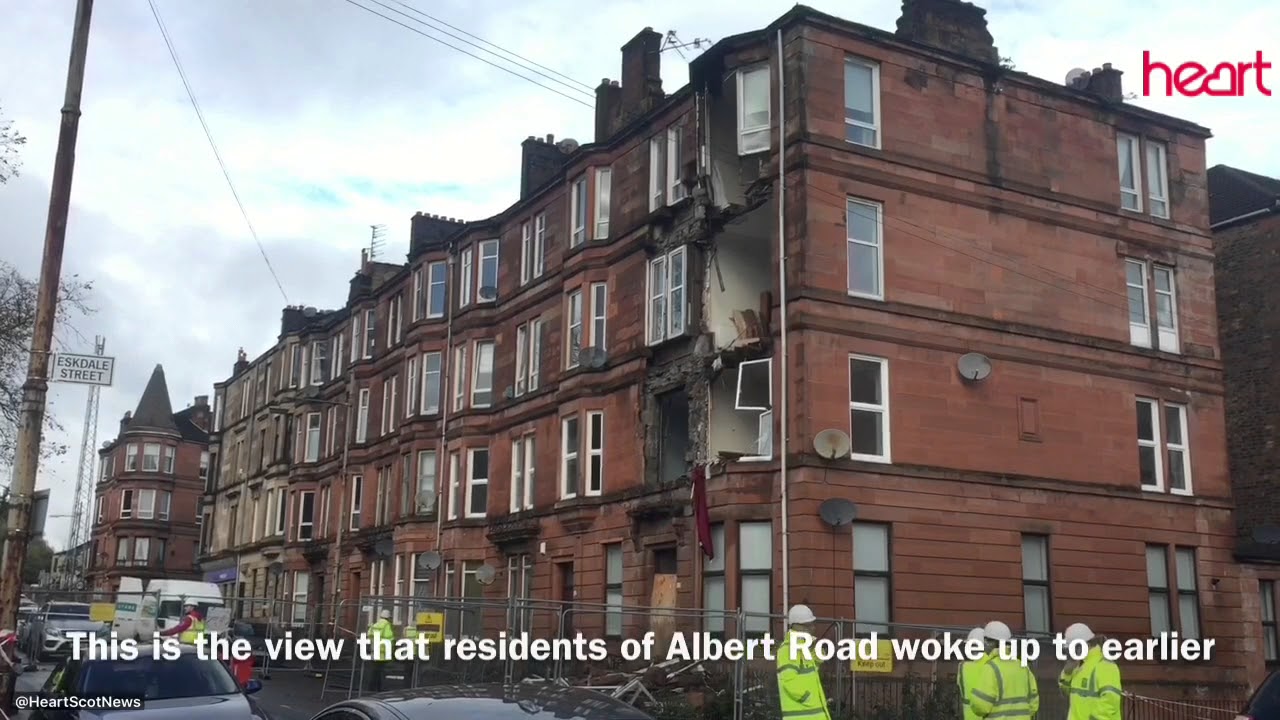 The front of a block of flats has been brought down in high winds as Storm Ophelia sweeps across Scotland.

The block in the south side of Glasgow, which was earmarked for partial demolition, came down at about 4am on Tuesday as the storm passed over from Ireland.

Glasgow City Council said an exclusion zone had already been put around the block due to the planned work and no-one was injured in the collapse.

Elsewhere, a scout hall roof was blown off and a number of trees came down in Dumfries and Galloway as the region took the brunt of winds up to 77mph.

Train services were temporarily hit between Glasgow and Edinburgh, and from the capital to Aberdeen, Dundee and Perth, as trees were blown onto tracks but transport seemed to avoid major disruption.

A spokeswoman for Glasgow City Council said the tenement in Albert Road housed private flats and had been empty for more than a year due to structural concerns around the windows.

She said: "Responsibility for repairing the property lies with the private owners, however the council had offered them financial assistance to help with the cost of repair.

"Stabilisation works to the property and removal of the bay window areas were due to commence on site within the next two weeks following the appointment of a contractor, by the owners' agent.

"Unfortunately, Storm Ophelia hit the city and there was a collapse.

"The exclusion zone did its job and contained the debris and, because we previously evacuated the building, no-one was hurt."

The worst effects of the storm were felt in Ireland where three people died on Monday.

Flood alerts are in place for west central Scotland, Ayrshire and Arran, Argyll and Bute and Dumfries and Galloway, and the Met Office has yellow weather warnings across the central belt until 3pm when calmer conditions are expected.

Police in Dumfries and Galloway said they had a "busy night" after a number of properties were left without power.

"In particular, calls relating to fallen trees blocking roads were prevalent and at this stage there are still a number of minor roads affected by fallen trees and branches, from Langholm and Moffat in the east of the region through to Stranraer and Portpatrick in the west," a force spokesman said.

"A number of calls were received relating to structural damage across the region, such as roofs being blown off buildings in Castle Douglas and in Dumfries, and scaffolding collapsing. At this time we have no reports of anyone being injured in the region.

"A number of homes in the region have remained without power overnight and efforts are under way to bring power back to those affected.

"In this regard, communities are asked to check on those who might be described as vulnerable neighbours and, where safe to do so, to check on their welfare."