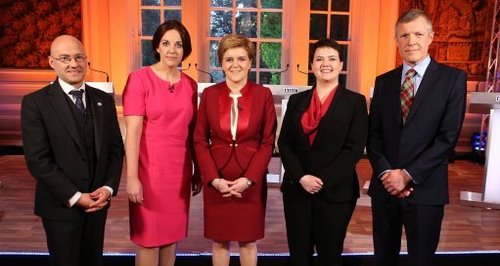 A fierce clash over independence dominated the final TV debate of the Holyrood election campaign, with Tory leader Ruth Davidson accusing the SNP of "keeping this wound open" with talk of a second referendum.

SNP leader and First Minister Nicola Sturgeon insisted that another such vote would only be held if a majority of Scots supported leaving the UK, as she stressed: "None of us should fear the democratic wishes of the people of this country."

But she came under attack from Labour, the Conservatives and the Liberal Democrats over her comments.

The clash came as the leaders of the five Holyrood parties took part in a live debate at Hopetoun House, outside Edinburgh, ahead of Thursday's Scottish Parliament elections.

While Scots voted against independence in 2014, the issue of Scotland's constitutional future has continued to loom large over the political agenda.

Although Labour's Kezia Dugdale insisted the SNP manifesto for the election does not give the party a manifesto to hold another referendum if they win, Ms Sturgeon said: "For me this is rooted in democracy and it's rooted in public opinion."

She argued that if there is "clear and sustained evidence that independence has become the preference of a majority of people in Scotland then no politician has the right to stand in the way of the deomcratic wishes of the Scottish people".

The First Minister said: "The question for other politicians on this platform is what is it they think gives them the right to stand in the way of a majority? Scotland will only become independent if a majority backs that, that is democracy and none of us should fear the democratic wishes of the people of this country."

She continued: "I believe in something, I have convictions, I have principles, I will continue to try to persuade people. But whether I succed or not will be down to the strength of the arguments I put forward and ultimately down to the wishes of the Scottish people."

The Tory added: "It's not up to her to see one opinion poll she likes and say we're putting this coutnry through it once more. It's not on."

With Labour proposing to increase income taxes in Scotland to improve services, Ms Dugdale argued: "So many people just want to move on from that referendum. We have substantial new taax and welfare powers coming to the Scottish Parliament, wouldn't it be great if we just used them to talk about the future, how we will improve our schools and the NHS, create opportunities for young people and build the Scotland we all want to see."

Meanwhile Scottish Liberal Democrat leader Willie Rennie suggested the SNP was being "anti-democratic" by continuing to argue for independence.

He said: "I want to focus on making Scotland the best country in the world again. We can't achieve that by having a groundhog day debate about independence."

Mr Rennie continued: "We had one of the biggest deomcratic experiences in our lifetime, they (the SNP) celebrated it constantly, but now as soon as its over and they don't get the result they wanted, they want to do it all over again.

"Did they not get the message, we want to stay in the UK."

He demanded nationalists "respect the result" and said to cheers: "I would even go as far as saying you are anti-democratic."

"The opportunity to continue to debate this is still there."

He said if the next Scottish Parliament was "bold" in its use of new powers that are coming to MSPs it "might to a great deal" to convince some No voters from 2014 to back independence.

The leaders also clashed about the future of the NHS and the shipyards on Glasgow's River Clyde, after union leaders there raised fears that a contract for the yards to build new Type 26 frigates for the Navy has been delayed.

Ms Davidson said UK Government ministers had "categorically assured" her that the work would go ahead.

"There is no change from last year," she said.

She accused the SNP leader of "shameful" scaremongering, and told her: "If you had had your way 14 months ago (in the referendum) none of these frigates would have been built."

And Ms Dugdale accused her Tory rival of "having told a porkie" when she said there was no change to the Ministry of Defence order.

"There is an 18-month delay on the work on the Clyde and it has to be reversed to honour the promise made to people during the referendum," the Scottish Labour leader added.

Ms Davidson also faced questions over her party's plans for the NHS, after the Scottish Conservatives said they would reintroduce prescription charges north of the border, claiming this would bring in #65 million for the NHS each year.

The Tory leader said her party was "looking at increasing GP services" claiming the proportion of the NHS budget spent on primary care has been cut by the SNP.

But Mr Harvie challenged her, saying: "If we went down Ruth's line what would be next, charges to visit your GP?"