Blair Logan poured petrol on his younger brother Cameron, 23, and the bed he was sharing with Rebecca Williams at their family home in Milngavie, East Dunbartonshire.

Ms Williams was rescued from the fire and treated in hospital, while Logan's parents were treated for smoke inhalation.

Logan, 27, pleaded guilty to charges of murder and attempted murder last month and was given a life sentence with a minimum of 20 years, reduced from 24 because of his early plea, at the High Court in Edinburgh on Friday.

When Blair Logan pleaded guilty last month, the court heard the two brothers had a ''hostile'' relationship, and Logan told police they had not spoken since the death of their grandmother in 2013.

Logan admitted pouring petrol ''with the intention of maiming or crippling'' Cameron, but claimed he did not mean to kill him.

The attack was said to be in retaliation for a recent incident at the house when his brother had punched him.

A computer seized from Logan's bedroom showed that from October 2016 he had carried out internet searches on burns victims.

The judge accepted court reports that he had "abnormal personality traits" but said there was no suggestion that Logan had a mental disorder and was fully criminally responsible for his actions.

The 27-year-old, who was a Tesco store assistant, admitted killing his brother during a police interview on January 13.

He told officers: ''It was not my intent to kill him but I did do it.''

When charged with the attempted murder of Ms Williams, he said: ''I thought she was out of the room'', and added: ''I did not wish to murder my parents.''

Logan had also admitted endangering the lives of his parents David and Catherine in the blaze, in which the family dog Gomez was also killed.

In mitigation, defence QC Shelagh McCall said Logan had shown genuine remorse and views the murder of his brother as "horrific" and that it cannot be justified.

She referred to a letter that his parents had written to the court which said they "find it extremely difficult to reconcile the Blair they know with the Blair who caused Cameron's death".

Both parents were in the court room in Edinburgh, along with Ms Williams and her family, as the sentence was passed by Lady Scott.

On the night of the fire, Cameron and Ms Williams returned to the family home after a New Year party with friends nearby.

An inflatable mattress had been set up for them in the living room and they went to sleep at around 4am.

Just over three hours later, Mrs Logan was woken by the family dog whining and went downstairs, where she saw a figure in dark clothing standing inside the living room, holding something on fire.

He threw it on the bed and then ran out, with Mrs Logan not knowing who it was at the time.

Unable to open the living room door, she ran out of the house to ask neighbours for help, shouting to her husband to warn him.

Ms Williams managed to roll on to the floor and crawl out of the room into the kitchen, where she was unable to open the back door, and put her head in the fridge to protect herself from the fire.

Mr Logan senior tried to get into the living room but was beaten back by the intensity of the smoke and flames.

He managed to get out of the house, before he and a neighbour rescued Ms Williams from the kitchen.

She suffered burns to her arms and face and damage to her throat, vocal cords and lungs.

Ms Williams has undergone surgery four times and may not be able to return to work as a broadcast journalist due to her injuries. 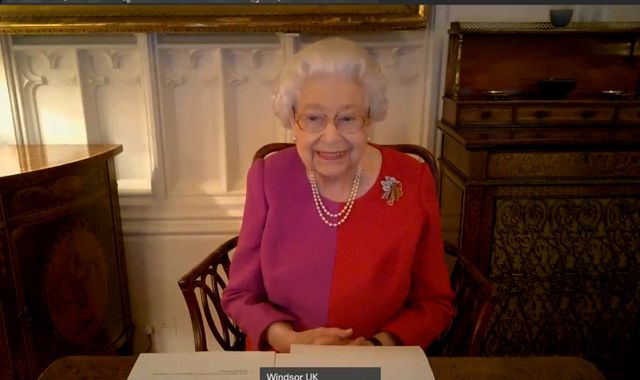 Queen thanks 'wonderful' efforts of Commonwealth volunteers in video call