Former Liberal Democrat leader Charles Kennedy was a gifted politician known for the wit, humour and humility he brought to his role.

Here are some of his more memorable quotes:

"Sorry dear, I am blow-drying the cat'' - on what a woman told him at the doorstep when he was out canvassing in March 2014.

"I am enjoying the Loch Ness monster exhibition with my nine-year-old son. I told him it's the world's most famous floating voter'' - September 2014.

"The election to the chairmanship of the European Scrutiny Committee was akin to putting King Herod in charge of a maternity ward'' - on the elevation of Eurosceptic Tory MP Bill Cash in January 2014.

"I am keeping a monastic silence for now'' - in July 2010, expressing his doubts about the coalition government.

"There is not a clear message coming out of either candidate. It looks like a squabble about nothing'' - he said referring to the party leadership contest in November 2007. 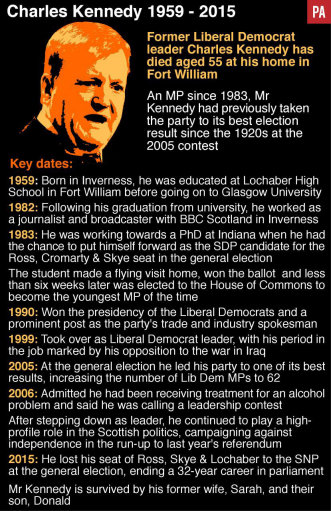 "I'm a big fan of Puccini. Tosca is great because it has got the lot - murder, politics, sex, intrigue. It is like the whole pastiche of the House of Commons, only with good music'' - Mr Kennedy commented in 2006.

"The Government may have spun us into war, but it must not be allowed to spin and smear its way out'' - in October 2004, claiming Tony Blair was trying to paint all those against the Iraq war as Saddam Hussein's appeasers or supporters.

"Prime ministerial power was allowed to progress without sufficient checks and balances. Parliament was sidelined, the select committees muted, while collective cabinet government was a joke'' - in the run-up to the Iraq invasion.

"In 21 years of election campaigns I have never kissed a baby'' - in June 2004 as he resisted the opportunity to break the habit of a lifetime.

"Some of my greatest moments of rhetorical exploration have come on the pier'' - Speaking about Brighton before the September 2003 Lib Dem conference.

"After Prime Minister's questions one of my first thoughts is that it would be nice to have a puff'' - Mr Kennedy quipped in January 2003.

"I don't think anyone would accuse me of going around with a hangdog look'' - he said in March 2004.

In August 2010 Mr Kennedy dismissed claims that he was defecting to Labour, telling the Sunday Mail: "I will go out of this world feet first with my Lib Dem membership card in my pocket.''