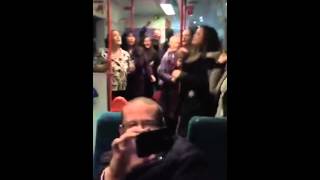 Proposal on the tracks

A video of a couple's wedding proposal on Saturday night has gone viral on Facebook.

Stuart Mathie and his girlfriend Michelle McGrillen first met on the Glasgow to Hamilton train.

Stuart arranged a flashmob to sing You're Just Too Good To Be True before getting down on one knee as they made the same journey at the weekend.

A video taken by another passenger's been watched more than half a million times.

The couple have since met up with Aimee Glen who filmed the special moment to thank her.