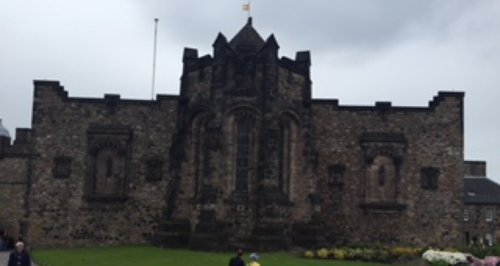 A whistle carried by an officer at the Battle of the Somme has been blown by his descendant to commemorate the Scottish soldiers who fought in the bloodiest battle in British military history.

It brought to an end an overnight vigil at the Scottish National War Memorial at Edinburgh Castle to mark the 100th anniversary of the battle.

Thousands of Scots from 51 battalions gave their lives and representatives of regimental associations from across the country gathered at the memorial to respect a two-minute silence at 7.30am - the moment when soldiers were led into battle a century ago.

Prayers were said at the vigil before candles were taken inside the war memorial and placed on a casket containing the original Roll of Honour for the fallen of the First World War.

The candles were guarded overnight by representatives from units including the Wrens, the Royal Navy and several Scottish Army regiments, standing by the casket with their heads bowed.

Edinburgh Castle was also floodlit red to mark the anniversary.

The two-minute silence on Friday morning was ended by Alan Hamilton blowing his great-uncle's whistle.

He said: "My great-uncle Robert Hamilton was an artillery officer at the battle. He was attached to a Scottish unit as an observation officer and he blew this whistle on July 1 at 7.30am 100 years ago to take his men over the top into action.

"He went forward with the regiment and, because of the high rate of casualties among the officers, he ended up commanding the regiment until he was wounded and evacuated.

"After the war, my father was given the whistle by uncle Robert and he then carried it through the whole of the Second World War when he was in the RAF, and when I joined the Army he passed it on to me. I carried it for 41 years and my son, who is a corporal in the Army, will be getting the whistle once these commemorations are over.''

He added: "It was quite emotional, the hairs on the back of my neck went up and I thought this was something really special.

"It's a big part of the family, with 100 years of history, and with a bit of luck that will continue on to future generations.''

Nicola Sturgeon called for reflection on the "horrors of the Great War'' as she attended a remembrance event at the Thiepval Memorial to the Missing in France on Friday.

The First Minister said: "It is now exactly 100 years since the start of the Battle of the Somme - the opening day of which has gone down in history as one of the bloodiest in the history of armed conflict.

"Barely a single community in Scotland was left untouched by the battle. Across Scotland communities are now remembering those who gave their lives, and a whole century on from the devastation and suffering of the Battle of the Somme, we should all reflect on the horrors of the Great War and give thanks that our continent now lives in peace.''

Beginning on July 1 1916, the Battle of the Somme was intended to achieve a decisive victory for the British and French against Germany's forces.

Major General Mark Strudwick, chairman of the trustees of the Scottish National War Memorial, said: "The courage and sacrifice of the British soldiers who fought at the Battle of the Somme should never be forgotten.

"Few words conjure the tragic scale and staggering loss of life during the 141 days that battle raged.

"One hundred years on we come together to honour them, to remember them and to ensure their memory and legacy lives on for generations to come.''