Scots Students 'Finding It Hard' To Get Uni Place 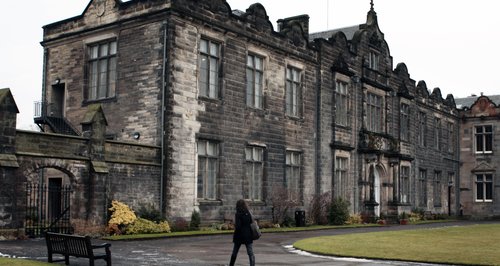 It is increasingly difficult for Scots to get a place at university in Scotland, a new report detailing "significant challenges'' facing the higher education sector has found.

Public spending watchdog Audit Scotland has carried out its first major review of higher education, with its report highlighting a 6% real terms cut in the amount of cash universities receive from the Scottish Funding Council.

While the Scottish Government provided more than £1.7 billion to universities and students in 2014-15, the report said institutions are "placing increasing reliance on generating income from fee-paying students from the rest of the UK and outside the European Union''.

As a result it has become "more difficult in recent years for Scottish and EU undergraduate students to gain a place at a Scottish university'', the report said.

With ministers having committed to ensuring a fifth of university students come from the poorest areas by 2030, Audit Scotland warned if this is to be achieved without an increase in funded places, it ``will likely mean fewer students from less deprived backgrounds being offered a university place''.

Students from Scotland and other EU countries are entitled to free tuition under the SNP administration's flagship education policy, but from 2012-13 undergraduates from England, Wales and Northern Ireland have had to pay fees of up to £9,000 a year, while the charges for international students from outside of Europe can be as much as £47,200 a year.

With Audit Scotland saying the sector faces "a number of significant challenges'', including the possibility of further cuts in Government funding, the report highlighted the "increasing reliance'' universities have on fee-paying students to boost their incomes.

Audit Scotland said: "Universities need to continue generating surpluses and reserves and making efficiency savings to fund capital costs and subsidise some of their activities. They are placing increasing reliance on generating income from fee-paying students from the rest of the UK and outside the European Union.''

Of the 232,570 students at Scottish universities in 2014-15, 66% were Scottish, the report said, adding that "the student population is becoming increasingly international''.

At Scotland's four "ancient'' universities - Aberdeen, Edinburgh, Glasgow and St Andrews - just under half (48%) of students were from Scotland.

The offer rate - the proportion of applicants offered a place - for Scottish students from universities north of the border has fallen from 57% in 2010 to 50% in 2015.

In contrast, the offer rate for international students from outside the EU in 2015 was 63%, with the rate for applicants from England, Wales and Northern Ireland ranging between 56% and 58%.

Last year almost one in five Scots (19%) applying to university did not receive any offers from a Scottish university, up from 15% in 2010.

Audit Scotland is now recommending the Government and the SFC "undertake and publish research on trends in applications, offer rates and acceptances for Scottish university places to assess what impact the limits on funded places are having on access to the university system for Scottish and EU students''.

Caroline Gardner, Auditor General for Scotland, said: "Given the growing pressures on public finances, the Scottish Government must be clear about its priorities for higher education and how it will target public funding to support those aims. It also needs to work with the Scottish Funding Council and universities to plan for addressing the challenges ahead.''

Professor Pete Downes, convener of Universities Scotland and principal of the University of Dundee, said the report "makes it clear that higher education is facing a range of very real funding pressures that need to be addressed''.

He said the university sector in Scotland "is one of the best in the world but our current success is seriously threatened by the funding pressures identified and quantified in the report''.

Prof Downes said: "This assessment was reached before the Brexit vote which is causing instability and serious levels of risk in almost every aspect of universities' business. The continued sustainability of Scotland's universities cannot be in question.

"We want to work closely with the Scottish Government, Funding Council and other stakeholders to address these challenges. We need to start from the same place; that higher education funding should be sustainable and competitive.''

Mary Senior, of the University and College Union Scotland, said the Scottish Government needs to consider whether it needs to use new taxation powers to help fund universities.

She said: "The report's conclusion makes it clear that public funding is central to our universities' success both in widening access and remaining world-leading institutions. The Scottish Government needs to take a hard look at the level of funding it gives to higher education and how it raises that money.

"We believe the time has now arrived to properly appraise taxation policy and whether we need to use the parliament's new powers.''

Labour education spokesman Iain Gray said: "Labour was absolutely clear in the Scottish election that we would protect the education budget in real terms. We stand by that pledge.

"Faced with the choice between using the powers of our Scottish Parliament to invest in education or carrying on with the cuts, the SNP must use the powers to stop the cuts.

"This expert report lays bare the impact on higher education of the SNP's refusal to protect education budgets. Schools and colleges have suffered, but this report reveals how the budget for universities has also been cut.''

Scottish Conservatives support the introduction of a charge of £1,500 a year for students, with this paid after they have completed their course and found work.

Tory education spokeswoman Liz Smith said: "The SNP's obsession with 'free' higher education is irresponsible and is starving the sector of vital cash required for teaching and capital development. It is also, as we know, having a detrimental knock- on effect on the college sector.

"Add to that the significant challenges posed by the SNP's insistence that all universities must take 20% of their intake from the most deprived communities by 2030 and it is easy to understand why the universities are so worried. This has major implications for student places and for funding.

"Unless additional money can be found for the sector Scotland's leading edge in higher education will be under threat. That is exactly why the Scottish Conservatives want to see the introduction of a modest graduate contribution.''

Shirley-Anne Somerville, the minister for further and higher education, said: "For the fifth year in succession, we are investing over £1 billion in our higher education institutions to provide a stable base allowing them to grow and attract additional funding.

"Supporting all students, particularly those from less advantaged backgrounds, is a top priority for this Government. That is why we have committed to implementing all of the recommendations made by the Commission on Widening Access and reviewing student support.

"Since 2007, the number of Scottish domiciled full-time first degree entrants to Scottish universities has risen by 11% and a record number of students successfully completed full-time higher education courses at colleges in 2014-15.

"Our commitment to free tuition contributes to Scottish average student loan debt being the lowest in the UK and our minimum income guarantee of £7,625 for the poorest students living at home is currently the best anywhere in the UK.''