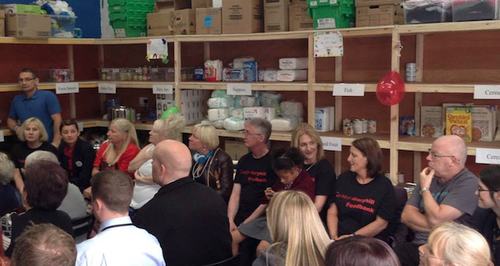 The social security system is failing to provide a safety net to stop people falling into severe poverty, a report by Citizens Advice Scotland has found.

It uncovered sharp rises in the number of people seeking advice on accessing food banks and crisis grants, and an increase in those who are struggling to keep up with paying rent and bills over the past few years.

The organisation said the findings show UK Government claims that there is a support network in place to prevent people falling into destitution do not reflect reality.

The Living at the Sharp End report is based on Scottish Citizens Advice Bureau (CAB) figures over the last four years, as well as a survey of clients and special focus groups of those who are living in severe poverty.

The proportion of debt-related advice being sought in relation to rent arrears in 2014/15 was a third higher (34%) than it had been in 2013/14, while almost two-thirds of those who responded to a CAS survey said they sometimes cut down on gas and electricity and 71% said they have cut down on food.

Over half of the survey respondents - 56% - said money worries have an impact on physical health, and 64% said they impact on their mental health.

Head of policy and public affairs Susan McPhee said: "There have been many different studies over the last few years showing that poverty is growing in Scotland.

"Our concern is that, as a society, we are in danger of becoming used to these reports, and that we are beginning to accept it as the norm.

"CAS believes that Scotland should never fall into that way of thinking, and that we should always assert that extreme poverty has no place in our society.''

She added: "When reports like this have been published in the past, the standard reaction of the UK Government has been to say that there is a support network in place that prevents people falling into destitution.

"Our evidence today shows beyond dispute that this is simply not the case. If it were, there would be no need for food banks at all, yet Scottish CABs had to give food bank advice over 7,000 times last year, and our report shows that too many Scottish families are struggling in severe poverty.

"As our new Prime Minister takes office, this report makes clear that the social security system is simply not working for the most vulnerable people in our society.''

A Department for Work and Pensions spokeswoman said: "This report fails to take into account latest statistics that show poverty in Scotland is now the lowest on record.

"Work is the best route out of poverty and since 2010 there are 140,000 more people in work in Scotland. We're also continuing to spend around £90 billion a year on working age benefits, supporting the most vulnerable in society.''

SNP social justice spokeswoman Eilidh Whiteford said: "If there is one thing that is clear from this research it's that austerity does not work. The need for food banks is a shameful indictment on our society and the Tories should be deeply ashamed that their social policies are actively driving people into desperate situations accessing basics like food and energy.

"When Theresa May gets the keys to Downing Street today she must not continue with the Tory ''business as usual`` of drastic cuts for those who are least able to bear them - the fact that there is such a demand for food banks is damning exposure of the Tory Party's welfare reforms. Instead of driving people further into poverty, Theresa May must tackle the root causes of poverty.

"The Scottish Government is currently spending #100m a year on mitigating the worst effects of welfare cuts, but this is money that could be much better spent addressing poverty.''