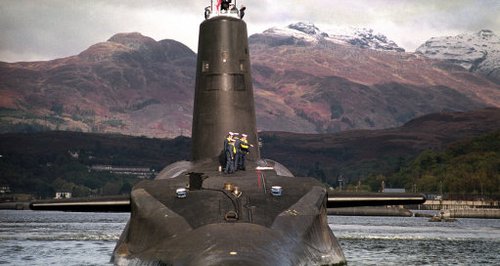 The police force that guards Britain's nuclear arsenal is operating "at the limits of its resources'' and further cuts would damage national security, a leading officer will warn.

Chairman of the Defence Police Federation Eamon Keating is set to speak out as the civilian Ministry of Defence Police faces a potential further reduction of 15% in its workforce and possibly being axed from guarding Trident warheads.

In a speech to the federation on Thursday, which is due to be attended by defence minister Lord Howe, he will say: "There have been suggestions that the MDP's role in guarding the nuclear deterrent might change.

"This is the most important job we do and any change to our role in safeguarding Trident impacts on the very future of the MDP, and on public and national security.''

He will warn that the force is too highly skilled'' and better placed to deal with civilian protesters than soldiers. Using military personnel would also mean that they could not be deployed elsewhere, the federation chief will say.

"It is because of the unique nature of our training and authority that we would have grave concerns if the role of the MDP in guarding the nuclear deterrent is reduced or replaced, especially by any group not subject to public scrutiny or accountability as we are,'' Mr Keating is set to tell delegates.

"The MDP officers with the vital role and responsibility of guarding the nuclear deterrent are highly skilled and exceptionally well trained. We have enormous respect for our colleagues in the Armed Forces, but it is simply not the case that every member of the Armed Forces is trained to the level of these police officers.

"There is the potential for a substantial skills gap that would affect the security of our most important defensive asset. Not only this, but service personnel used for guarding duties could not then be deployed for any other duties - even in the event of a crisis.''

There are currently around 2,600 MDP officers. The workforce was reduced by a third due to budget cuts in 2010.

"The MDP has worked at the limits of its resources for more than five years. It's unrealistic to expect we could do more or even deliver the same levels of security with less. The loss of officers will put defence assets at greater risk, and that is not a decision that should be taken to cut costs.''

A Ministry of Defence spokesman said: "The security at all of our nuclear facilities is of the utmost importance, and the MoD has several security providers which deliver this capability.

"Our arrangements are frequently tested and kept under continual review. We would never make changes that would place these in jeopardy.''