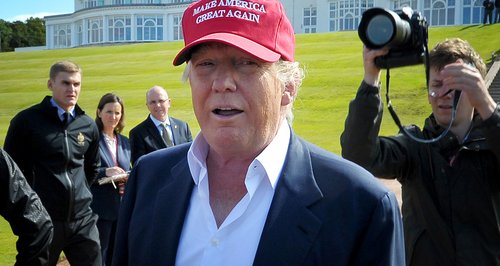 Donald Trump's business links with Scotland began a decade ago as he promised to create a legacy to his mother Mary MacLeod, who was born in Stornoway in the Outer Hebrides.

His love of golf made the country the perfect base to expand the Trump empire into Europe, but controversy soon arose around planning, environmental issues and clashes with local people who refused to move from his proposed Aberdeenshire golf course and hotel site.

The billionaire was initially welcomed by leading politicians, with first ministers Jack McConnell and Alex Salmond both accused of being too close to the businessman.

When plans for the Balmedie course were rejected by Aberdeenshire councillors, the decision was called in by the Scottish Government in a rare move and eventually given approval.

But as arguments festered over an offshore wind farm planned in view of the course and the levels of investment promised, relationships broke down.

Mr Trump went from calling Mr Salmond "an amazing man'' to describing him as an "embarrassment to Scotland''.

Appearing at a Scottish Parliament committee in 2012, Mr Trump said he was "lured'' into building his £1 billion golf resort in Scotland with assurances that the nearby wind farm would not go ahead.

Away from politics, Mr Trump faced opposition from environmental groups and local people who refused to make way for the development, captured in the documentary Tripping Up Trump.

The acclaimed film detailed alleged bullying of residents near Mr Trump's golf resort over compulsory purchase orders, but the Trump Organisation described it as "highly biased and manipulative''.

The Balmedie course eventually opened in 2012 and has been praised in golf circles, but it has little chance of hosting the major competitions Mr Trump would like to be associated with.

That led to his surprise purchase of Turnberry in 2014, a historic course in South Ayrshire which is already on the Open Championship rota.

The deal had little of the controversy around his Aberdeenshire development, with questions only raised over the decision to change the name of the resort to Trump Turnberry.

The billionaire said the name change aimed to make the course "more successful'', and was not intended to massage his ego.

Turnberry staged the women's Open in 2015 with Mr Trump in attendance, but as he stepped up the rhetoric in his US presidential campaign, the R&A - the governing body of golf - said the course will not be considered for holding the Open before 2022 at the earliest.

As he arrives in Scotland on Friday the outcome of the EU referendum will be emerging, and with the presumptive Republican nominee backing a Leave vote, he will have a keen eye on the result.

However, he will not meet senior politicians during his trip as Scotland's First Minister Nicola Sturgeon and UK ministers have declined an invitation to Turnberry.

In fact, the visit would not be going ahead at all had MPs voted to ban Mr Trump from the UK over some of his campaigning comments. A Westminster debate in January saw many MPs criticise the businessman, but ultimately they voted against a travel ban.

For his part, Mr Trump vowed to withdraw from his businesses in Scotland if the vote went through, something he said would "cost the economy millions''.