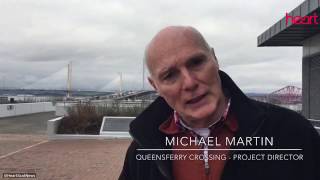 Heart News gets an update on the Queensferry Crossing

Officials are ''optimistic'' that the £1.35 billion Queensferry Crossing will never have to close as a result of wind-shielding being fitted during the project.

The 1.7-mile mega-structure - which is replacing the Forth Road Bridge - has entered its final phase of finishing works and was 94% complete as of December.

Only one segment of the deck out of a total of 122 is still to be lifted into place to complete the link across the Forth between the Lothians and Fife.

One of the defining features of the new bridge still to be installed is 5,700 metres of wind-shielding.

Project officials say they are ''optimistic'' the 3.5-metre high transparent shields will mean the new structure will never have to close.

Earlier this month, the existing Forth Road Bridge was forced to close for a day when a lorry was blown over despite the bridge being closed at the time to high-sided vehicles.

Transport Scotland project director David Climie said: ''The wind shielding on the new Queensferry Crossing will break up the wind so that it significantly decreases the pressure on high-sided vehicles.

''What it means is that if a high-sided vehicle can get to the crossing, it will be able to cross safely and not, as we have seen recently on the Forth Road Bridge, take a risk and end up with a significant problem.

''We're optimistic that the new bridge will never close but we can't guarantee that as who knows what might happen.''

Other works still to be completed include four concrete pours, 20 stay cables out of a total of 200 to be installed and 20,000 square metres of waterproofing.

Michael Martin, project director of Forth Crossing Bridge Constructors, said the team is working hard for the bridge to be opened in May this year as planned.

He added: ''All I can do is produce a credible programme for the work that we have factoring the conditions that we're likely to get, and there's one thing for sure, that there will be no lack of effort or commitment from my team and shareholders to get this bridge open as soon as we possibly can.

''I can't give a guarantee as it would be foolish to do that because it involves things that I cannot control.''

Mr Climie added: ''The budget has been reducing through the duration of the job and we're still within the budget that we announced back at the end of 2015, which is £1.35 billion, and we'll be completing the project within that and looking to open in May this year, which is within the contractual time scale.''

When the Queensferry Crossing opens, the Forth Road Bridge will be retained as a dedicated public transport corridor and will also provide a largely traffic-free environment for cyclists and walkers across the Forth.