A viewer spotted her husband on the show with another woman.

When settling down one weekend for an episode of Ant and Dec's Saturday Night Takeaway, Helen Gundry didn't expect that what she would see on the programme would change her life.

During the particular episode the Geordie duo threw a surprise wedding for a lucky couple, but Helen was particularly taken aback to see that one of the guests was her husband who was meant to be working away in Dubai.

And there's more...he was with another woman!

Daniel Gundry appeared on the show with which turned out to be his SECOND wife Susan Brooker.

In the UK bigamy is illegal and therefore prohibits somebody from entering into a marriage with someone whilst already married to someone else and that's exactly what Helen discovered her husband had done, married another woman.

Read More: Are These The Weirdest Saturday Night Takeaway Viewer Complaints EVER?

Shocked from what she had seen on TV, Helen couldn't resist but our her husband on social media and left a scathing comment on the official Saturday Night Takeaway Facebook page... 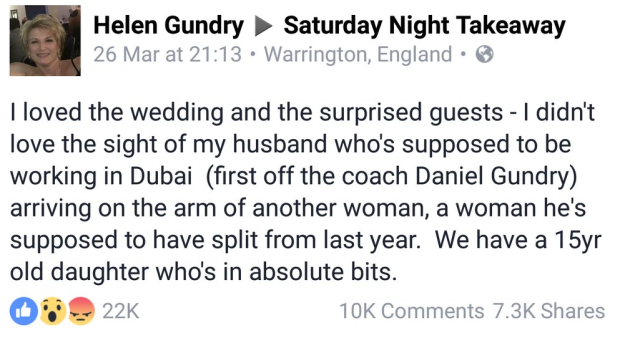 The heartbreaking post explains that she and Gundry share a daughter who was left in tatters after the revelation came to light.

He initially denied he was married to Susan Brooker but later admitted to bigamy and was yesterday jailed for six months at Warrington Magistrated Court and ordered to pay £115 compensation to both his wives for 'embarrassment, shame and humiliation'.

Daniel married his first wife Helen in 1998 and then married Susan at a ceremony in the Seychelles whilst still legally married despite claiming that the pair had separated.

However it emerged that Daniel had asked Helen to try things again.

Helen and Susan have apparently now become friends - every cloud!

Who did Toby Aromolaran choose on Love Island? And who left the villa last night?