The TV presenter looked visibly moved as he picked up the award with Declan Donnelly.

The presenting duo found themselves in receipt of yet another Best Presenter gong at the 23rd annual awards ceremony held at London’s O2 Arena on Tuesday, and during his acceptance speech, Ant was particularly emotional when he referenced the tough year which has seen him enter rehab for substance addictions and split from his wife Lisa Armstrong.

Speaking on stage, Ant said: “It’s been a very emotional night tonight. It’s been quite a year, it’s been quite a tough 12 months, so winning this tonight really really means a lot. I personally would like to thank all my family and friends, I love you, thank you very much. Thank you to all of you for your support, it really really means the world to me and has helped me get through. Thanks to you [Dec], little guy. I love you man, thank you.”

The pair had a busy evening, as they also got up to accept the award for Best Challenge Show - which went to ‘I’m A Celebrity… Get Me Out of Here!’ - and for the newly named Bruce Forsyth Entertainment Award, for their work on ‘Ant and Dec’s Saturday Night Takeaway’.

Whilst on stage accepting the Entertainment Award - which was renamed to honour the legendary entertainer who passed away in August last year - they said: “It’s an honour to pick this award up, the Bruce Forsyth Entertainment Award. We started filming again for the new series of ‘Saturday Night Takeaway’ today and we also started filming a little tribute to Bruce Forsyth, so to pick this up this evening is very very apt, and we’re very very honoured. 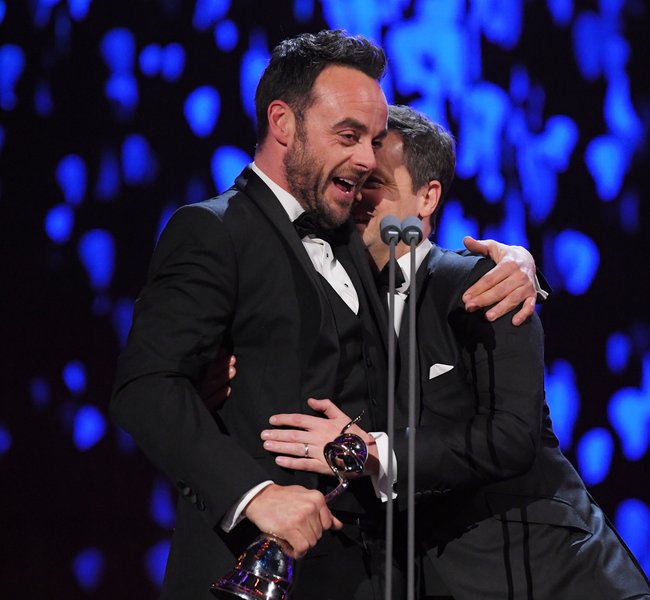 “We performed with Bruce on this very stage a few years ago and it’s no exaggeration to say it was one of the highlights of our career. We all miss him terribly so we are thrilled and proud and honoured to be collecting the first Bruce Forsyth Entertainment Award. So this one’s for you Brucie.”