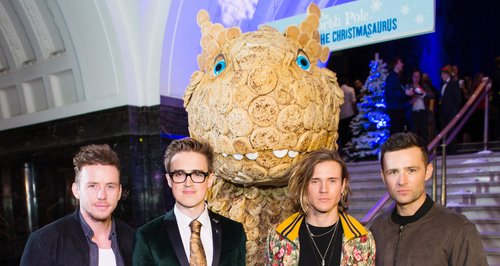 As the singer-turned-author celebrates his brand new book 'The Christmasaurus' hitting the shelves just in time for the festive season, there's another amazing surprise in store for him...

Is there NOTHING the father-of-two does not do?!

Because from where we're standing everything he turns his hand to seems to be a roaring success!

Whether it's his dazzling pop career as part of MyFly and McBusted, his hilarious and adorable Youtube videos with his two young sons Buzz and Buddy, or now his career as a professional children's author, Tom Fletcher is where it's at!

The 31-year-old got all festive with friends and family at the launch of his new kid's book 'The Christmasaurus', published by Penguin Random House Children's, at London's incredible Natural History Museum.

Nice chatting (and eating) with you. #TheChristmasaurus

Read more: Muggles Are Invited To Eat Christmas Dinner At Hogwarts - For A Price From The Dark Arts!

The pop-rocker celebrated his first novel with bandmates Danny Jones, Dougie Poynter and Harry Judd from McFly, as well as a 'Giant Crumpet Christmasaurus' at the event...who they all posed for selfies with, OF COURSE!

#TheChristmasaurus and here’s what’s underneath the cover. All gold and shiny. . .

However, the happy news didn't stop there, as the news was confirmed that the tale is also set to be turned into a Hollywood film!

"I’d only finished the first draft of the book when I sent it to the director [Michael Gracey] and he literally came back in the first email with illustrations and I thought it was amazing," Tom told the 'Daily Star'.

Daddy Fletcher also confirmed that he's written the soundtrack for the movie and between you and us, it sounds pretty amazing!

Rumour has it that 'X-Men' actor Hugh Jackman is also a fan of the songs, after he sent a congratulatory video to Tom saying: "The songs are great, I've heard them."

But Hugh's not the only big name who's loving a bit of dinosaur fun...apparently big screen hunk Zac Efron is also a fan!