10 Amazing Things You Didn't Know About Winnie The Pooh

In 1926, English author A.A. Milne was so inspired by his son's teddy collection that he decided to write a charming story about a honey-loving bear and his woodland friends.

Jump forward 90 years and Winnie the Pooh continues to be one of the most beloved characters from children's fiction, alongside his best pals Christopher Robin, Tigger, Piglet, Roo, Kanga and Eeyore.

Read more: Can You Match Each Item To It's Disney Film?

To celebrate nine decades of Winnie the Pooh, we've rounded-up some amazing facts about the loveable bear to get you running to the library all over again. We'll meet you in the Hundred Acre Wood...

1. The original Winnie the Pooh soft toy had a very swanky first home...

AA Milne's son, Christopher Robin Milne, was gifted a teddy bear by his mother in the early 1920s and it is this exact bear that inspired Winnie the Pooh. Christopher Robin's mother Dorothy de Sélincourt actually purchased the bear from super posh London department store Harrods, which is apparently where she snapped up the toys that inspired Tigger, Piglet, Eeyore, Kanga, and Roo.

2. Winnie the Pooh was inspired by a real-life bear...and a swan!

Christopher Robin named his teddy bear after Winnie - the real-life Canadian black bear that lived at London Zoo during the 1920s and 30s. The 'Pooh' part of the name actually emerged when the Milne family met a swan on holiday which was nicknamed 'Pooh'. Who knew!

Read more: Mickey Mouse Is Hidden In Almost Every Disney Film! Can You Find Him?

3. You can still see all of Christopher Robin's soft toys that inspired Eeyore, Kanga, Roo and Tigger

Head inside the New York Public Library and you'll find the original teddy bears owned by Christopher Robin Milne in all their glory! Amazingly, the teddy bears have stood the test of time, EXCEPT for the original 'Roo', which sadly was lost in an apple orchard in the 1930s. If only someone would find it while walking the dog! 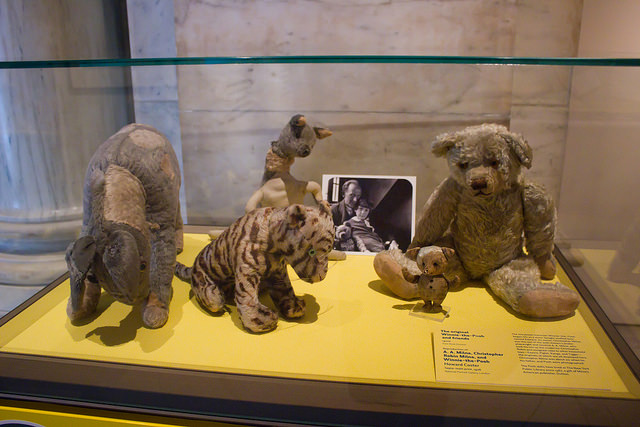 Read more: Can You Name These Forgotten Disney Characters?

4. Winnie the Pooh has broken records in ancient languages

Winnie the Pooh has been translated into dozens of languages, but it's a special Latin version of the book that broke records. In 1958, Winnie Ille Pu translated by Dr. Alexander Lenard became the first non-English book to be featured (for 20 weeks!) on the New York Times Best Seller List and remains the only Latin book to EVER appear on the list. Nice work!

5. The Hundred Acre Wood is a REAL place!

Winnie the Pooh and his friends famously lived in the Hundred Acre Wood...but did you know it's actually based on a very real place? Milne purchased a country home in Ashdown Forrest, Sussex, in 1925, and the nearby Five Hundred Acre Wood became the inspiration for his fictional world. 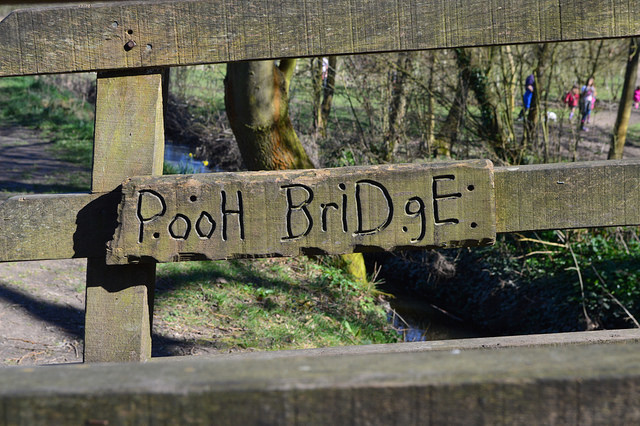 Read more: These Disney Princesses Reimagined As New Mum's Are On Point

6. Winnie the Pooh has even inspired street names

Don't underestimate the power of Pooh bear! Winnie the Pooh is such a hit in Poland that there's a street completely dedicated to the loveable character. Kubusia Puchatka Street, which directly translates to Winnie the Pooh Street, was formally unveiled in Warsaw in the first half of the 1950s. We wouldn't mind paying a visit!

7. Winnie the Pooh is just one of 15 fictional characters to have THIS special honour...

In April 2006, Winnie the Pooh became one of just 15 fictional characters to get a star on the Hollywood Walk of Fame! Other characters that have been given the prestigious honour include Mickey Mouse, Big Bird, Shrek and Kermit the Frog. Don't forget to snap a picture next time you're on the Hollywood Boulevard. 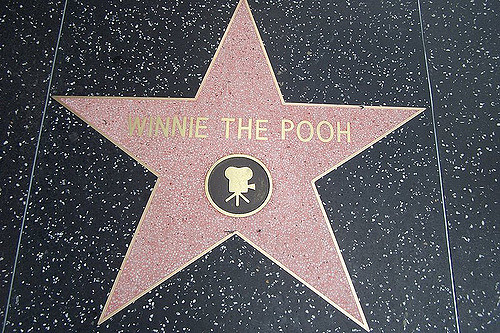 8. The game of Poohsticks has taken on a life of its own!

AA Milne created the lovely game of Poohsticks for Winnie the Pooh and his friends to play, but now it's being enjoyed by people all over the world! The aim of the game is to drop a stick in a stream from one side of a bridge and then run over to the other side of the bridge to see whose stick is visible first...simple, but perfect for all the family! Amazingly, the Poohsticks World Championship match takes part in Oxfordshire every year.

9. Winnie the Pooh illustrations are worth a small fortune...

Part of the magic of Winnie the Pooh is how he was brought to life by E.H. Shepard - the illustrator who worked with AA Milne on the original stories. Well, if you happen to have an original Shepard illustration gathering dust in your attic it may be worth taking it to an auction house! An original illustration of Pooh, Christopher Robin and Piglet playing Poohsticks sold in December 2014 for $492,727. That's £397,592!!

Read more: See The Faces Behind The Magic Of Beauty And The Beast

10. Winnie the Pooh has always been a labour of love for Disney

Disney first purchased the rights to Winnie the Pooh in the 1960's, and since then they've been keeping the characters in the Hundred Acre Wood alive for future generations! It's not been easy though...when making the film Winnie the Pooh and the Blustery Day in 1968, Disney artists used around 1.2 million pencils and made almost 100,000 drawings. How incredible is that!

Read more: How Well Do You Really Know Your Disney Quotes?

What's your favourite Winnie the Pooh moment? Let us know below...