All the celebrity babies born in 2018 so far

From Royals to rockstars, it seems everyone is having a baby this year. Here's all of 2018's bundles of joy so far...

We aren't even half way through the year and there's already been a huge celebrity baby boom for 2018.

From the likes of Coleen Rooney to The Rock, here are all the celebs that have added to their brood or become parents for the first time this year!

Patricia is the couple's first child together, whilst Frank has two children, Isla and Luna, from a previous relationship.

Let us introduce you to our little girl. Patricia Charlotte Lampard! We’re so in love @franklampard

Made In Chelsea star Spencer Matthews became a father for the first time after wife Vogue Williams gave birth to a baby boy in the early hours of September 5th.

This morning at 3:55am, we welcomed our son into a quiet London hospital... He is beautiful and healthy. We feel truly blessed @spencermatthews

Declan Donnelly, aka one half of Ant and Dec, and his wife Ali Astall have become first time parents to a baby girl named Isla Elizabeth Anne.

Besotted dad Dec shared a picture of his newborn's hand wrapped around his finger.

‪Ali and I are thrilled to announce the arrival of our baby girl, Isla Elizabeth Anne, who was born just after 9 o’clock this morning. Mother and daughter both doing well, Dad is head over heels! D x

Already mum to little Polly, the former TOWIE beauty has welcomed a son into her family. She is yet to reveal the name.

My beautiful son Welcome to the world darling .... Born Saturday 1st September 4.12am

Footballing superstar and World Cup 2018 Golden Boot winner Harry Kane announced that fiancée Kate had given birth to baby Vivienne Jane Kane with absolutely NO pain relief at all.

The couple already have a daughter named Ivy.

Our beautiful addition to the family! Vivienne Jane Kane. So proud of @kategoodersxx for having the most amazing water birth with no pain relief at all. #mygirls #hypnobirthing

The Body Coach became a father for the first time after former page 3 girl Rosie gave birth to their daughter. The couple have announced that they've chosen the name Indie for their first born.

The showbiz couple announced that they'd added to their brood after Luisana gave birth to their first daughter, Vida. Vida is a younger sister to Noah, 4, and Elias, 2.

It is believed that Russell Brand's wife, Laura Gallacher, welcomed their second child in July this year - although it has not yet been confirmed by the couple.

Bear and Carly in Ireland.

The former X Factor contestant proudly announced on her Instagram page that she'd given birth to her first child - a boy named Hudson. The star revealed she had a hefty 24 hour labour - ouch!

Andy and I are elated to announce the birth of our darling son Hudson. Born at 2:25am on 07.21.18, our Little Man made his big debut after a legendary 24 hr labor. Mummy and Baby are doing great, Daddy is already on diaper duty! Baby Hudson we both love you incredibly and unconditionally, and are eternally grateful to be on this journey called life with you. Here is to our next chapter. Love Mama Bear x #announcement #babyboy #hudson #welcome #love #family #baby #wedidit #laboranddelivery #nyc #mountsinai #mom #dad #mamabear #papabear

The This Morning soap expert welcomed a baby girl called Betsey, which ITV announced on This Morning's Instagram.

Congratulations Sharon and Paul, and welcome to the world, gorgeous baby Betsey!

23-year-old Olympic diver Tom Daley welcomed a baby son into the world with 43-year-old Dustin Lance Black. The couple have named their tot Robbie Ray, in memory of Tom's father, who passed away from cancer.

• 27/06/18 • Welcome to the world our precious little Robbie Ray Black-Daley • • • The most magical moment of my life. The amount of love and joy you have brought into our life is immeasurable. Our precious son.

The former EastEnders actress and her estranged husband Dan Osborne welcomed their second daughter Mia, who will be little sister to 3-year-old Ella - and judging by their cute snap it seems the siblings are bff's already!

My little family is complete! Mia Osborne is so beautiful! The birth went well and I can’t thank my family enough. @selinajossa @toniosborne1 @danosborneofficial.. Me and baby are healthy and resting now. Welcome to the world baby girl! Ella is the best big sister! So caring and sweet. Thanks for the kind messages, love to you all! X

Corrie star Helen gave birth to her second daughter - Delilah Ruby Sinclair. She is younger sister to 3 year old Matilda, and Helen revealed that she was 'healthy and weighted 6lbs 15oz.

The 42 year old welcomed her first child, a baby boy named Santiago Enrique Bastion (Santi for short) with her husband Jose Baston. The name 'Santiago' is Spanish for Saint James.

So Monday was our 2 year anniversary and I didn’t forget, I was just too sleepy to post! My wonderful husband sent me these gorgeous flowers and I’m giving him a baby ! I’m the luckiest woman in the world to have a husband like Pepe and I pray we have 50 more years of many blessings, much laughter and endless happiness! Happy Anniversary Amor Mìo!

The royal couple welcomed a baby girl weighing 9lb 3oz, who is the Queen's seventh great-grandchild and 19th in line to the British Throne. A name is yet to be revealed! 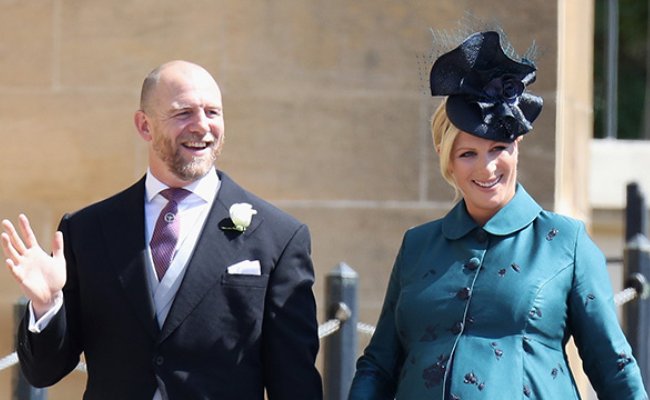 The former Emmerdale actor announced that he and wife Caroline had welcomed a baby girl, Elsie-Rose on May 20th. Adam already has a three-year-old son Teddy.

I think I’ve got a favourite... don’t tell teddy ps when you’ve learnt to read ted I was only joking Elsie-rose thomas xx

The 60-year-old actor and his 34 year-old-wife Hilaria welcomed their fourth child together, naming him Romeo Baldwin. The tot weighed a health 81b 2oz at birth.

Hello, world! This is Miles Theodore Stephens - We are drowning in his little peeps and nuzzles. Our household feels overwhelmed with love. Thank you for all your well wishes!

The Australian supermodel welcomed baby Hart with her husband Evan Spiegel - the CEO of Snapchat. Hart will be younger step-brother to 6 year old Flynn, whom Miranda shares with ex-husband Orlando Bloom.

The 37 year old opera star gave birth to a baby boy named Xander Robert Selwyn Levitas. Together they already have a daughter, Aaliyah.

Dwayne 'The Rock' Johnson and his wife Lauren Hashian welcomed a baby girl on the same day that the Royal Prince was born. They named her Tiana Gia Johnson, and she is his third daughter.

Skin to skin. Our mana. Blessed and proud to bring another strong girl into this world. Tiana Gia Johnson came into this world like a force of nature and Mama @laurenhashianofficial labored and delivered like a true rockstar. I was raised and surrounded by strong, loving women all my life, but after participating in baby Tia’s delivery, it’s hard to express the new level of love, respect and admiration I have for @laurenhashianofficial and all mamas and women out there. Word to the wise gentlemen, it’s critical to be by your lady’s head when she’s delivering, being as supportive as you can.. holding hands, holding legs, whatever you can do. But, if you really want to understand the single most powerful and primal moment life will ever offer - watch your child being born. Its a life changer and the respect and admiration you have for a woman, will forever be boundless. And to my third and youngest daughter, Tiana Gia - like I did when your two older sisters Simone Alexandra and Jasmine Lia were born, you have my word, I’ll love, protect, guide and make ya laugh for the rest of my life. Your crazy dad has many responsibilities and wears many hats in this big ol’ world, but being your dad will always be the one I’m most proud to wear. Oh and one more thing.. you’re gonna love rollin’ in daddy’s pick up truck. #TianaGiaJohnson #3rdDaughter #BlessesAndGratefulMan #ImInTROUBLE

The royal couple welcomed their third child, Prince Louis Arthur Charles, on St Georges Day at 11.01am.  The new tot is now 6th in line to the throne, behind Prince Charles, Prince William, Prince George and Princess Charlotte.

The Duke and Duchess of Cambridge are delighted to announce that they have named their son Louis Arthur Charles. The baby will be known as His Royal Highness Prince Louis of Cambridge.

Days after it was reported that boyfriend Tristan had cheated on her, Khloe welcomed baby True as the newest member of the Kardashian family.

Our little girl, True Thompson, has completely stolen our hearts and we are overwhelmed with LOVE. Such a blessing to welcome this angel into the family! Mommy and Daddy loooooove you True!

Whilst there's been no official confirmation from the GBBO host, he was spotted with partner Lliana Bird walking through London with their newborn on April 7th. The secretive celeb hasn't posted anything on social media accounts as of yet.

Who wants to sit on the edge of my hat ? X

The One Show presenter gave birth to her first child, a baby girl called Ruby Ellen Horgan, at the end of February.

Coleen welcomed son number 4 into the world mid-february, and named him Cass Mac Rooney. He's the first Rooney child to have a name beginning with 'C' - his three older brothers named Kit, Klay and Kai, all share the same initials.

So Happy to welcome our Baby Boy .... Cass Mac Rooney into the world weighing a healthy 8lb 10oz. He is beautiful

The 20 year old hid her entire pregnancy from the world right up until she gave birth. She and partner Travis Scott named their little girl Stormi.

Ex-Cbeebies presenter Sarah-Jayne gave birth to her second son, Indiana. Her husband, who used to star in Hollyoaks, revealed that their new tot will be nicknamed Indy.

World meet Indiana Fox Callaghan photographed by the incredible @bundlesofjoyphotography I highly recommend you get booking. 6 years ago I met @sjhoneywell and 6 years later we have the most wonderful perfect family. Couldn’t be more in love or prouder of all of them. Must say thanks again to Dr Flood of @nhs_lincoln_maternity for coming in on late notice and dealing with a very tricky procedure to deliver Indiana safely and repair my beautiful wife too. A big thank you to all the staff there who were superb from first to last minute. http://www.honeymumster.com/single-post/2018/02/26/Dramatic-Birth-Anyone #love #family

We’re absolutely delighted to introduce you to our beautiful baby girl. Aurelia Honey Partakis was born on 21/01/18. 6lb 2oz of pure joy!Daddy and I are floating on Cloud 9 and falling more in love with her by the minute. Welcome to the world my sweetheart X

Kim and Kanye's surrogate baby is their third youngster, and the showbiz couple named her Chicago.

The former Newsround presenter became a father for the first time after his wife Portia gave birth to baby Roman.

When Roman came to see daddy at work... The number 1 priority, love you, support you and make you SO proud #strictlytour #lastday @strictlycomedancinglive

The model and wife of footballer Peter Crouch gave brith to baby number three only a few days after New Years. The couple opted for a simple name - Johnny.