The Celebrity Big Brother star admitted that his marriage to the ex-EastEnders star is "back on track" after the birth of Mia.

Dan Osborne says the birth of his second daughter saved his marriage.

In scenes aired on last night’s show, the former Towie hunk told Roxanne Pallett how becoming a dad for a third time had helped him reconnect with estranged wife Jacqueline Jossa.

Dan, 27, said: "After we met we spent every day together for three months.

"During our hard times and stuff, we had a spell where we lost that friendship. Once we had Mia we started getting on."

Continuing to reflect on his life on the outside, he said that he was as attracted as ever to the mother of two of his children, and that he couldn’t imagine being with anyone else.

He said: "That's the one thing with Jacqueline, because usually you're with someone and you go through a bad time with them, you lost that attraction.

"I've never lost that attraction to her. I always tell her she's beautiful and stuff.

"I honestly think if we break up and we're done then I'll be single and that will be it.

"I would just concentrate on my kids and work." 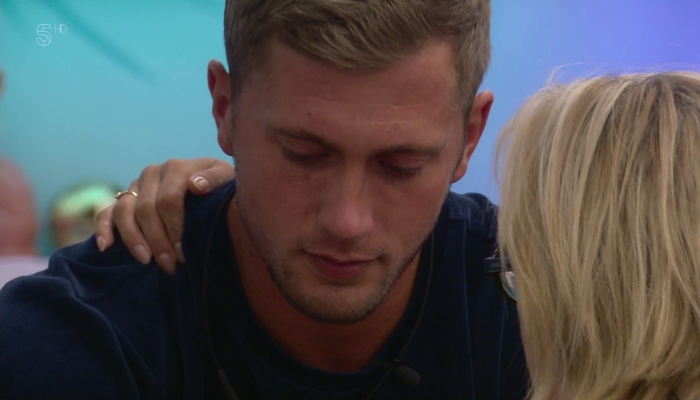 Dan broke down when Sally told him that he would have two more children (Image: Channel 5)

Also in the house is Gabby Allen, who was rumoured to have had a fling with Dan during a fitness retreat in Marbella.

However, the pair have both furiously denied anything went on between them - although the rumours saw Jacqueline, 25, kick Dan out of the marital home just weeks before she gave birth.

The couple became parents to baby Mia in June, just weeks before their one year wedding anniversary.

They already had a daughter, Ella, 4, and Dan has a 3-year-old son Teddy, from a previous relationship.

While in the house he has spoken about how much he misses his kids - and psychic Sally Morgan told him that he will go on to have two more with Jacqueline.