HOW much did you say, Masood?!

Fans of EastEnders were left gobsmacked last night at one of the most shocking storylines since silent barmaid Tracey finally spoke out loud.

It's no secret that the Taylor family struggle to make ends meet financially, and it seems we've now discovered the reason behind this:

In last night's episode, Bernadette popped over to Ian Beale's chippy and ordered three portions of chips and two pieces of fish - which Masood charged her a whopping £17 for.

Masood, who was recently fired from The Queen Vic for undercharging punters, tried to tempt Bernadette with a "new and improved recipe" whilst she attempted to wangle a free saveloy. However, the youngster was unsuccessful in nabbing any freebies, and was in fact stung with a seemingly extortionate cost for her minimal order.

Fans of the soap took to Twitter in mock outrage at the whole shebang:

£17 for fish and chips? #EastEnders

It seems highly unlikely that the Taylor family, who barely had a Christmas due to empty purses, would happily drop almost £20 on some fried cod and chips.

Only recently poor Bernadette left her coat on the bus, and had to endure wearing a scary furry ensemble that her mum found in the lost property at the launderette because she couldn't afford to buy her a new one. 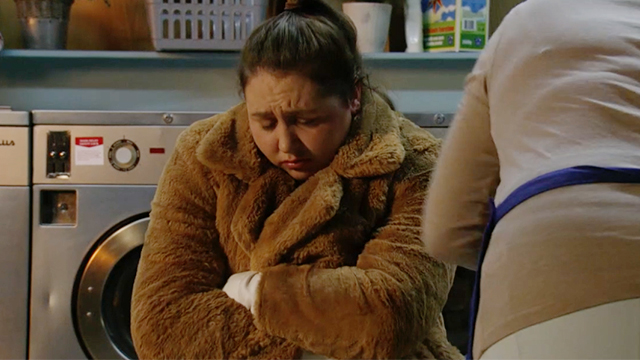