The popular character was written out in 2015, but viewers think Vincent Hubbard's disappearance could prompt his return.

Fatboy met a gruesome end after he was crushed to death locked in the boot of a car - a fate meant for Ronnie Mitchell's ex-lover Vincent.

But now fans of the soap think that Fatboy could be set to make a dramatic return, especially as the car salesman's body was never seen on screen.

Referring to Richard Blackwood's sudden departure from the soap, she said: "He should be back already is what I’m saying! I don’t know! I don’t know when he’s coming back. 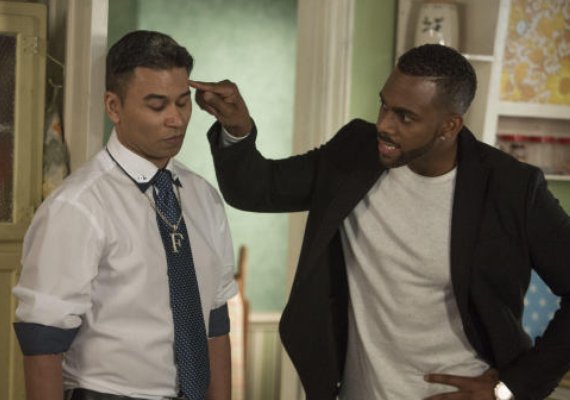 "So watch this space! I hope he’s going to come bearing gifts as well. He can’t be away for a little while and come back with nothing."

Now people are wondering if Vincent will be make a shock return to Walford and bring Fatboy with him, and if him being kidnapped by bent coppers was part of a much bigger storyline that will play out over then next few months.

One fan commented: "I would love to see Fat Boy back we never saw him dead so he could come back. I miss him and I am sure I am not the only one."

However, not everyone agrees with the theory, with one fan saying:"Vincent has gone simples ! And Fatboy isn't returning if he was he would have done so by now."

Actor Ricky Norwood, 31, also added fuel to the fire, telling OK! Magazine: "I think [Fatboy] would probably get some type of online revenge for the Vincent character, and maybe the Mitchells.

"Where he fleeces money from them, and sets up Dot in a nice house.

"I mean, it's EastEnders and if you're a fan of EastEnders then you'll know that there are many characters that have died and come back.

"So, you know, anything is possible. EastEnders is such a big machine, they’re going 100 different directions right now.

"You never know, and if there was an opportunity of a storyline that was exciting then maybe.

"But I’m not gonna hold out for it, you can’t in this business."