The reality babe spoke to Heart about ex-partner Adam's sneaky behaviour, and on what is REALLY going on between her and Kem.

First Love Island casualty Kendall Rae-Knight didn’t tune in to the show until Tuesday night - and she told Heart she was stunned by her former couple Adam Collard’s snakey behaviour.

The 26-year-old was on the edge of her seat as Welsh solicitor Rosie Williams laid in to the Geordie PT for making a move on newbie Megan Barton Hanson behind her back.

Kendall said: “I can’t believe him, he’s so indecisive.

“A lot of people have been tweeting me suggesting I should go back in the Villa now Niall [Aslam] has left.

“Going back in there would be bittersweet, and I would only want to do it if there was someone in there I really liked.”

Kendall was the first beauty to be kicked off the show after a recoupling saw Adam choose sultry Rosie over her.

However, after a few days he’s already got itchy feet, and tried to worm his way in to ex-stripper Megan’s affections. 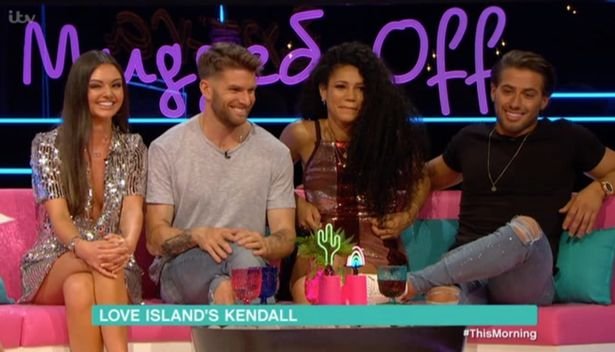 But there might be another reason for Kendall steering well clear of making a grand re-entrance.

Earlier this week she was spotted kissing 2017 Love Island winner Kem Cetinay, 22, who she appeared alongside on ITV2 spin-off Love Island: Aftersun.

However she coyly denied that the pair had struck up a romance.

Read more: Love Island make-up bags are now a thing... and you can get them at Superdrug

If things do develop further between her and Kem she might want to watch out for her ‘lookalike’ Amber Davies.

The Welsh actress started off describing the Blackpool beauty queen as “adorable”, but after it emerged she had gotten close to her ex-boyfriend Kem, she tweeted - and deleted - that she had been wrong.