The World Cup is just around the corner! And with it comes stickers...lots of them.

As if the prospect of watching hours of football isn't enough to conjure excitement, some kids (and a selection of grown adults) insist on collecting football stickers.

Sticker magazine manufacturer Panini brings out their World Cup sticker book every four years and poor parents are begged relentlessly to buy the stickers to fill it with.

Read More: Rio Ferdinand Reveals The Hardest Thing About Being Both Mum And Dad

But with no assurance which footballers you get in the pack it could cost you hundreds of pounds in stickers to actually complete the book.

And boffins have worked out that it will cost an estimated £773 to get all the team sheets filled in - ouch.

The book contains 32 pages of players, managers and stadiums which equate to a collector needing 682 correct stickers to fill it.

Maths professor Paul Harper from University of Cardiff's mathematics departments worked out a formula, taking duplicates into consideration, to find out just how much it would cost budding collectors to complete. 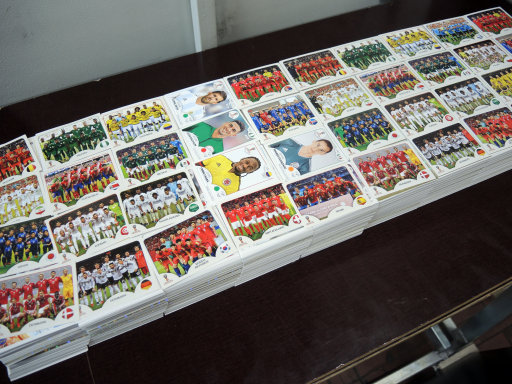 A pack of five stickers costs 80p, if you beat all odds and bought 137 packets with no duplicates then he says you could fill the book for £109.60.

But being a maths professor, he managed to work out a formula taking the probability of duplicates into account and calculated you would need to buy 4,832 stickers - or 967 packets - to finish the book.

To try and cut the cost he recommends swapping unwanted stickers amongst friends but it's still no mean feat to get all the stickers!

However, Panini said: "If you have difficulty swapping, you can send off to Panini for your missing stickers."

"The theoretical cost calculated by the academics assumes that the collector is in a bubble with no one to swap with or no access to the internet to send off to our missing stickers service."