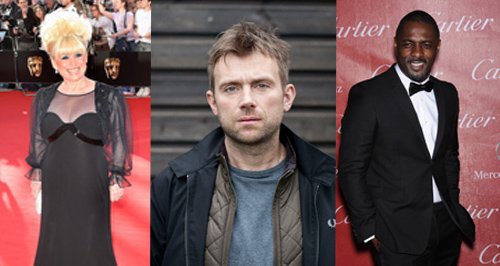 Idris Elba heads up some of the biggest names on this year’s Honours List after being awarded an OBE from The Queen for his contribution to drama, but who else made the cut? Find out as there has been some surprising additions to the prestigious list!

As 2015 drew to a close, the UK's biggest names wait with baited breath to see if they have made the coveted Honour's List, and just as expected there have been some surprising entries.

‘Luther’ star Idris Elba can now add OBE to his title after being recognised by Her Majesty for his contribution to drama. The handsome star is currently in the running for two Golden Globes Awards in January, but claims being named on the Honours List is "beyond special".

Speaking on his accolade, the 43-year-old actor said: "Awards and honours come in all shapes and sizes and all as significant as the other. But this is beyond special as it comes from Queen and country, and I couldn't be more proud for receiving this right now. What a year. On me head son!"

Read More: A Look Back At The Biggest Moments Of 2015

Elba - who is also tipped to be the first black James Bond - sits among the likes of Blur front man David Albarn, and former ‘Eastenders’ actress Barbara Windsor who have been awarded a Damehood and an OBE for their respective contributions towards entertainment and music.

Surprising entries on the list this year included musician Goldie, real name Clifford Price, who has been acknowledged for his contribution to music, TV, film and his work with charities.

Another entry that set tongues wagging is Jacqueline Gold. The the savvy businesswoman, who runs sex shop empire Anne Summers, was awarded a CBE to the surprise of many.

Elsewhere, NET-A-PORTER founder Natalie Massenet and Easyjet Chief Executive Carolyn McCall are among the business women named on the list.

Read More: Most Controversial Stars Of 2015

Who made the cut? Famous Faces On New Year Honour's List:

Honour: Damehood for services to charity and entertainment

Honour: OBE for services to drama

Honour: OBE for services to music.

Honour: OBE for services to broadcasting and charity

Occupation: Stage and film actress - known for I, Claudius and A Little Night Music

Honour: Damehood for services to drama

Honour: OBE for services to snooker

Honour: OBE for services to cycling

Occupation: Actor - star of TV's Missing, Cold Feet and patron of a centre which supports people affected by The Troubles

Honour: OBE for services to drama and the community in Northern Ireland