10 Celebrities Who Were Contestants On Games Shows Before They Were Famous! 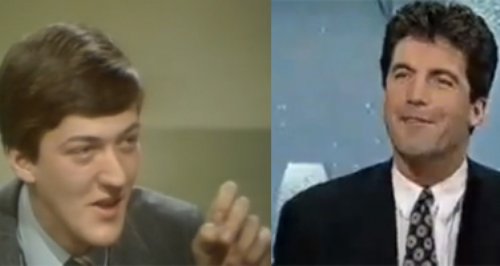 Nowadays we look up to these celebrities for fashion tips and for advice on being successful but they all had to start out somewhere.

We're talking Simon Cowell, Amanda Holden, Lady Gaga and Arnold Schwarzenegger, who were contestants on classic game shows before we even knew who they were!

Read more: Can You Guess The Celebrity Childhood Photo?

Simon Cowell on Sale of the Century in 1989

He may be Mr Billionaire now but Simon Cowell made his TV debut on a show called Sale of the Century. He appeared in two episodes after winning the first round. He won only £20 worth of cooking utensils! Who knew he took so much pride in his go-karting...

Amanda Holden on Blind Date in 1991

At 19-years-old, Amanda Holden appeared on the TV show next to Cilla Black! Watch her flirt her way to bag the man of her dreams.

Read more: Before They Were Famous: 'Blind Date' With Cilla Black

Arnold Schwarzenegger on The Dating Game in 1973

He's got a pretty impressive film career under his belt and even a political career (he served two terms as the governor of California) but who knew that Arnold Schwarzenegger started out as a contestant on a dating show! Who knew that after his brief fling on TV, he'd be back (sorry, we couldn't resist!).

Stephen Fry on University Challenge in 1980

Nowadays he is more famous for hosting TV Shows, not being a contestant on one!

Stephen Merchant on Blockbuster in 1997

He's one of the writers behind The Office (Ricky Gervais being the other) but here he is at his humble beginnings on Michael Aspel-hosted Blockbusters!

Johnny Vegas on Win Lose or Draw in 1995

Comedian Johnny Vegas - Michael Pennington as he was known then - was a contestant on the Pictionary-based game. Watch Johnny come  into his element in this clip at around 11:50. There was no way he wasn't going to become a comedian!

Steve Martin on The Gong Show in the 70s

Although his comedy career was starting to come in to place at this time, Steve Martin was never actually in front of the camera - he was writing for other people. However, here he is, playing the banjo on a TV show before he was famous!

Aaron Paul on The Price is Right in 2000

He played meth cook and drug user Jessie Pinkman in Breaking Bad but here he is on a gameshow before Pinkman was even a character! He looks like he gets a little too in to it...

A 19-year-old Lady Gaga - or Stefani Germanotta as she was known back then - was one of the people pranked on this gameshow. Situations were created to bring people to their boiling point and Lady Gaga was no different. Look at the salad this restaurant give her. Bleurgh!

Britney Spears on Star Search in 1992

How cute is ten-year-old Britney here? She was doing so well right up until she lost out by just a quarter of a star!