Will Terry be back on GBBO after missing an episode? Here's all you need to know about the retired air steward from his job to his wife.

Great British Bake Off 2018's Terry missed a tense dessert week for week three of the baking competition, due to illness.

As a result, no-one left the tent last week, meaning that TWO eliminations are likely to happen in tonight's episode.

Terry has wowed fans with some of his adventurous designs so far in the series, here's what we know about the intricate baker... 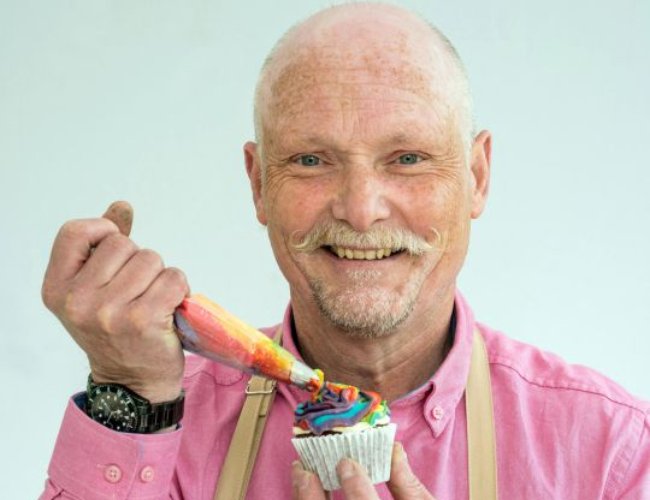 Where is Terry from?

Terry, 54, is from the West Midlands. As a youngster, it was his grandmother who encouraged him to bake, whilst his dad showed him the ropes when it came to making bread and pastry.

What is GBBO Terry's job?

Terry is now retired, but he used to work as an air steward.

He also has a background in fine arts, and once made a living as a prosthetic technician. It's this part of his creative flair that shows through in his extravagant baking.

Sadly, Terry lost his wife to cancer a year ago aged 52, after a ten month battle with the disease.

His wife was a primary school headteacher, a hocky-lover and and the 'biggest fan' of Terry's cakes. She is survived by their two daughters, and Terry.

Terry revealed that it was his daughters who urged him to apply for the show.

He has previously said: "I wanted to change life a little, shake it up a bit, start a new course.

"I am on anew journey in life at the moment, and what better way to start it."

Meanwhile, Paul Hollywood is dishing out more Hollywood Handshakes than we ever thought possible, whilst Prue Leith is wowing with her extravagant neckwear and out-there ensembles.

And, of course, hosts Sandi Toksvig and Noel Fielding are providing us will all the entertaining skits imaginable.

Why is Noel Fielding not on Celebrity Great British Bake Off 2021?

When was the Celebrity Great British Bake Off filmed and how many episodes are there?

Great Celebrity Bake Off 2021 line-up: Meet all the stars taking part this year