The second Mamma Mia film - Mamma Mia! Here We Go Again, is due for release in the next few days. Here's what we know...

Mamma Mia! Here We Go Again is the highly-anticipated sequel to the first Mamma Mia film. The likes of Meryl Streep, Pierce Brosnan, Colin Firth, Amanda Seyfried and Dominic Cooper are all set to return - alongside some new faces in the form of Lily James and Cher.

Here's all we know about the feel good flick so far...

When is the release date for the second Mamma Mia film?

Mamma Mia! Here We Go Again will be hitting cinemas across the UK on 20th July 2018 - ten years after the first Mamma Mia film was released.

Who are the cast of Mamma Mia?

Amanda Seyfried and Dominic Cooper are back as loved-up couple Sophie and Sky, whilst Meryl Streep returns as Donna Sheridan, Sophie's mum.

Their younger selves are being played by newcomers Jeremy Irvine, Hugh Skinner and Josh Dylan in the flashback scenes. 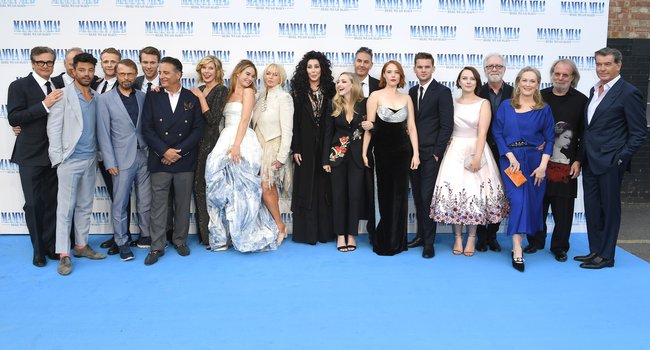 Downtown Abbey star Lily James will also be a new face in the upcoming movie, playing a younger Donna in flashback scenes, whilst legendary hitmaker Cher will make an appearance as Donna's mum.

And of course, Julie Walters and Christine Baranski will be adding a sprinkling of humour as their characters Rosie and Tanya are back to cause some mischief with pal Donna (Meryl Streep).

Where is Mamma Mia filmed?

The fictional Greek Island of Kalokairi was actually filmed in Croatia for the second movie. The isle of Vis, just off the Dalmatian Coast superseded the last location of Skopleos - the Greek Island that was used to film the first Mamma Mia flick.

Most of the action filmed on Vis takes place in Komiza - in particular Barjoska Bay.

Which Abba songs are featured in Mamma Mia 2?

The full list of songs are as follows:
When I Kissed A Teacher
I Wonder
One Of Us
Waterloo
Why Did It Have To Be Me
I Have A Dream
Kisses Of Fire
Adante Adante
The Name Of The Game
Knowing Me, Knowing You
Angel Eyes
Mamma Mia
Dancing Queen
I've Been Waiting For You
Fernando
My Love, My Life
Super Trouper
The Day Before You Came