Watch! 10 Hilarious Trailers For The WORST Horror Films Ever Made! 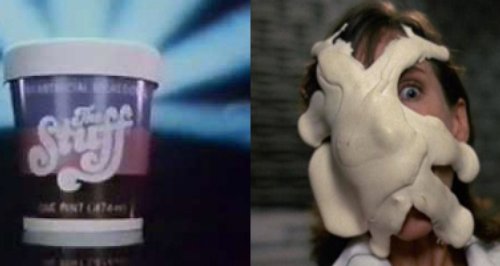 These blockbusters set out to be the scariest films ever made but their ridiculous story lines are more likely to make you laugh than scream in horror this Halloween. From possessed iron manglers to an evil pot of yoghurt, we've rounded up the trailers for THE WORST scary movies ever!

Prepare yourselves for the (not so) SCARIEST laundry mangler you have ever seen! If you were thinking about washing those shirts and pants anytime soon you may want to think again because this possessed machinery is a killer apparently. Shrill screams, dramatic pauses and pints of fake blood make this trailer comedy gold.

Obviously the producers of this nineties horror flick were convinced that nothing could be more frightening than two foot tall serial killer Leprechaun to give you the willies on Halloween. Unfortunately for them, the trailer has us in fits of laughter. Make sure you keep an eye out for Jennifer Aniston's starring role (don't worry it was waaaay before 'Friends'.)

This is officially the most menacing pot of yogurt you will EVER see. All hell breaks loose when a mysterious goo oozes from the centre of the earth and is marketed as the latest tasty dessert treat. Cue some (barely) scary zombies, a stern warning from a little boy and a (terrible) terrifying pack shot of the life threatening snack.

This piece of cinematic genius features a deadly zombie that is about as scary as Uncle Fester from 'The Addams Family' and a vampire whom we are sure isn't as terrifying as the countless makeup free ladies giving people a fright first thing in the morning! Add this to the dodgy special effects and we're onto a winner for the most cringeworthy horror film.

Stephen King may have struck gold with 'The Shining' but this doesn't mean his other novels are easily translated into cinema gold! Meet Billy Halleck, a gluttonous and overweight lawyer who rapidly begins to lose weight after a 109-year-old gypsy puts a curse on him. Hmm…maybe the gypsy could help us lose a few pounds?!

Prepare yourself to laugh with tears as you watch this horror B movie which follows a family being pursued by vegetarian goblins who seek to transform them into plants so that they can eat them.

Next time you think about curling up in your comfy bed, you might want to think again if this disastrous horror movie is anything to go by because there is a demonised four poster bed that might eat you whole!

This film is so bad it's actually become iconic! Innocent citizens are left fearing for their lives when a big ball of goop from outer space crashes to earth in a meteorite and threatens to destroy anything in its wake. SHOCK HORROR!

Actress Naomi Watts probably looks back in horror at this cringeworthy film about an evil building lift in which she had a starring role. If this budget movie is an attempt to encourage us to take the stairs more often then they have failed miserably.

Now here is a film that brings new meaning to the phrase killer workout, as a bunch of innocent spa goers are subjected to some ridiculous deaths at the hands of deadly saunas and other gruesome devices.