£2b Road Plan For South West Set Out 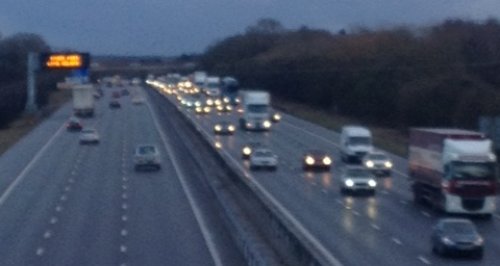 Highways England have met with suppliers and stakeholders to set out how £2 billion of government investment to improve the capacity of roads in the South West will be delivered.

'The investment will see improvements being developed along a series of motorways and A roads between now and 2021, giving road users simpler, faster and more reliable journeys. It will also boost the region’s economy and help to bring the country closer together. The work is part of the government’s ‘Road Investment Strategy’ to triple levels of spending on roads by the end of the decade, which was announced last year. Highways England, the government-owned company which took over responsibility for England’s motorways and major A roads earlier this year, set out its plan for the South West at an event in Yeovil earlier today.'

“Our road network connects, people, places and business and this new investment will bring huge improvements to journeys around the South West. The Government has committed record funding to specific projects to ensure our roads continue to play a key role in supporting connections in and out of the South West. As Highways England, we’re delivering that investment to help unlock billions for the economy by increasing road capacity, reducing congestion and improving safety and accessibility for those that use or live alongside our roads.”

“As part of our long-term economic plan, we are making the biggest investment in roads in a generation. The £2 billion investment in the South West of England will significantly improve journeys and help create jobs. We’re upgrading key roads like the A303 and A30 and building a new junction on the M49 near Bristol.  This will create a new strategic corridor to the South West and complete the dual carriageway into Cornwall so that hardworking families can have better access to jobs, shops and leisure facilities.”

'The A303/A30/A358 corridor provides one of the main access routes between London, the South East and the South West. On the A303 around Stonehenge we are developing a scheme between Amesbury to Berwick Down, including building a tunnel to improve journey time reliability on this heavily congested road and improve the setting of the World Heritage Site.

We will also be dualling the A303 between Sparkford and Ilchester and the A358 between the M5 at Taunton and A303 at Southfields. These three schemes are the first steps in our aspirations to provide an expressway between the M3 and the South West.

In addition we are working working closely with Cornwall Council to develop a scheme to provide more than eight miles of new dual carriageway on the A30 between Carland Cross and Chiverton Cross roundabouts to support local plans that will see an increase of over 22,000 homes and more than 11,000 jobs.

Other improvements include a major improvement to Junction 23 of the M5 Bridgwater which will support proposals to develop around 5,000 new homes and create more than 4,400 new jobs. The work will also be key to the construction and ongoing success of the new power station planned at Hinckley Point.

The new junction on the M49 at Avonmouth will release the potential for a further 8,000 jobs in the Severnside and Avonmouth area.

And investigations into the benefits of connecting the two dual carriageway sections of the A417 near Birdlip, Gloucestershire will allow us to present the options around 2020.

Across the South West, Highways England will also invest a further £90 million during 2015/16 to resurface roads, repair and renew structures like bridges and viaducts; and improve safety barriers.'