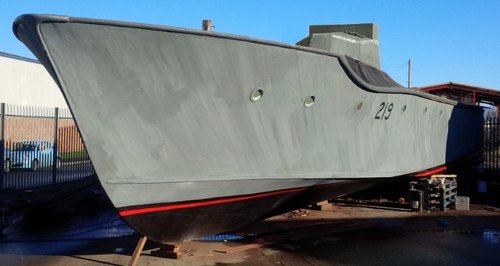 On Saturday January 31st a 70ft Second World War Motor Torpedo Boat will travel through Bridgwater on her way to be launched in Bridgwater Docks.

Following just over a year of restoration work, MTB 219, the last one left of her kind and veteran of the "Channel Dash" will be loaded onto the back of a lorry for a 2 mile journey through the town centre to make her way back to the water.

Listen to how she came back to life:

At 10am 219 will leave Durleigh Displays, Symons Way, on a transporter and turn left onto East Quay.

At the traffic lights by Currys and the Car Wash she will turn right onto The Clink.

She will proceed through the traffic lights, onto Northgate, past the Council Offices, past the Police Station and the back of Angel Place Shopping Centre (Mount Street), continuing past Scott Cinema to the Mecca Bingo roundabout.

At the Maltshovel roundabout she will turn right, onto Victoria Road, which bends off to the left.

As Victoria Road curves back to the right it becomes Kendale Road.

She will then turn right into Coleridge Road. At the roundabout she will then take the second exit (turning left) which is sign posted as "no through road".

She will then be joined by the Bridgwater Sea Cadet Band who will escort her past the Bowerings Animal Feeds Yard onto the side of Bridgwater Docks.