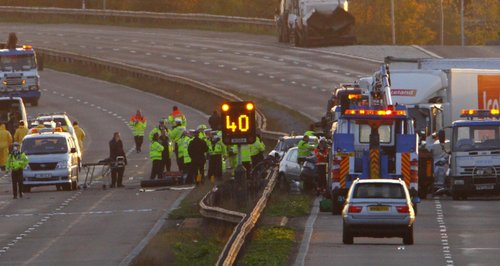 A Somerset man in charge of a Fireworks display near the scene of the M5 crash in Taunton in 2011, in which seven people died and 51 were injured, has been cleared of breaching health and safety laws.

51 year old Geoffrey Counsell was the contractor hired by Taunton Rugby Club to run a display on the night of the pile up - November 4th 2011.

A judge directed a jury at Bristol Crown Court to find Mr Counsell from Ashill not guilty of a single charge of failing to ensure the safety of others contrary to the Health and Safety at Work Act.

The charge alleged that Mr Counsell, of Ashill in Somerset, failed to ensure he operated the firework display so as to ensure, as far as was reasonably practicable, that others who might be affected were not exposed to risks to their health and safety.

He denied the charge.

At Bristol Crown Court Mr Justice Simon has ruled  that Mr Counsell had ``no case to answer'' following an application from the defendant's barrister at the halfway point in the trial.

The judge said the prosecution's case was based on ``hindsight'' and there was not sufficient evidence to show that Mr Counsell ought to have foreseen that smoke from the display could have drifted and mixed with fog to create thick smog.

Mr Justice Simon said "In my view, the prosecution case is heavily weighted with hindsight,''

"I have therefore concluded that the evidence is such that the jury cannot continue in these circumstances and it is my duty to stop the trial and order an acquittal.''

The foreman formally found Mr Counsell not guilty and he was discharged.

Mr Justice Simon explained to the jury of eight men and four women why he was directing them to acquit Mr Counsell.

He said that smoke from fireworks, unlike bonfire smoke, had never before been regarded as a hazard and therefore Mr Counsell could not have foreseen what happened.

"I concluded therefore that the prosecution case did not pass the threshold for you to be sure the defendant, Mr Counsell, was guilty,''

"The prosecution case was dependent on hindsight and consequence rather than foresight and risk.''

Grandparents Anthony and Pamela Adams, from Newport, South Wales; father and daughter Michael and Maggie Barton, from Windsor, Berkshire; battle re-enactor Malcolm Beacham, from Woolavington, Somerset; and lorry drivers Terry Brice, from South Gloucestershire, and Kye Thomas, from Cornwall, died and 51 people were injured, including some seriously, in the pile-up.

'I am obviously hugely relieved that this prosecution of me is now at an end. I would, however, like to say something about my experience of this case.

'Before a final decision to go ahead with the display was taken, the Highways Agency, the Taunton Deane Borough Council and the Avon and Somerset Constabulary were consulted.

'All were informed of the fact and nature of the display. No objection of any kind was raised. As matters transpired, the Taunton Deane Borough Council and Avon and Somerset Constabulary were to be the agencies which prosecuted me in respect of that same display.

'The display was carried out without incident. It was a very foggy night and the fireworks produced some smoke, which would have mingled with the fog.

'However, I saw nothing to cause me to believe that any firework smoke would cause a hazard and I do not believe that it did so.

'As the judge noted in his ruling, the prosecution case was founded on criticism of me for 'failing to take a step which had never been taken before'.

'It is perhaps relevant to note that there were around 1,000 people at the display, including serving police and fire officers. Not a single one of those people raised any concern at the time about the smoke or fog, whether during or after the display.

'Firework displays have taken placed in this country for centuries. The chemical composition of fireworks has not changed for hundreds of years. All fireworks produce smoke.

'However, nowhere in any training or guidance is it suggested that firework smoke presents an actual or potential danger of any kind.

'The current authoritative guidance from the Health and Safety Executive contains no reference to any risk posed by firework smoke, whether on its own or in combination with fog.

'The same applies to guidance produced by other official bodies and indeed current guidance provided by the Taunton Deane Borough Council.

'The prosecution experts spent two years investigating the possible causes of the crash, including the interaction between firework smoke and fog. There were unable to find a single example of a case in which firework smoke had previously been shown to pose a danger.

'The conclusion of the principal prosecution witness was only that the probability of any link between the display and the crash was 'weak to moderate'.

'The prosecution case against me was based on the suggestion that I should have recognised the risk of something occurring which has never been shown to have happened before, which probably did not happen, and risk of which was not recognised by anyone else.

'The judge noted when he ruled that there was no case to answer, the prosecution case was 'heavily weighted with hindsight'.

'As many people will be aware, the assistant chief constable of Avon and Somerset Constabulary Mr (Anthony) Bangham appeared on national television less than 48 hours after the crash to advance the police belief that smoke from the display had caused the crash.

'Hours before the pronouncement was made, officers from Avon and Somerset Constabulary had unlawfully obtained a warrant to search my home, as the judge found during the trial.

'The unlawful search of my home took place despite the fact that I had previously expressly confirmed to the police my willingness to co-operate with their inquiry in any way.

'Those concerns were simply ignored. Again, in August of this year, those representing me set out in court documents the very issues which caused the case to come to a halt today. Nevertheless, the prosecution continued.