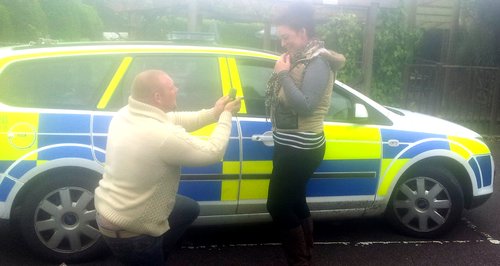 From the back seat of a police car, more used to hearing profanity and anger, one Bridgwater-based officer heard only a confession of love when a young couple agreed to tie the knot moments after leaving the scene of a road accident.

PC Nicola Rickards had only been giving the couple and their two dogs a quick lift to safety on Saturday morning (18th Oct) when Caine Hutchings popped the question out of the blue.

The 30 year old appeared calm and coolly asked his girlfriend of two and a half years, Emily Dukeson, to be his wife not long after leaving the stricken Citroen in a ditch.

He had been planning to propose to 27 year old Emily that day, and was driving from their home in Radstock to a scenic spot he knew on the cliffs at Blue Anchor to pop the question, but lost control near Shapwick on the A39 and the car struck a tree. None of the passengers were injured and Nicola wanted the four to be somewhere safe whilst waiting for recovery. She said:

"I said I’d drop them and the dogs at the Pipers Inn in Ashcott, he sat in the back and she was in the front. All of a sudden he produced the box through the middle; I’m not sure who was more excited. I had to remind her to give him an answer after a few ‘oh my gods’ and ‘seriously?’ from her, and said he ought to get down on one knee and do it properly when we got to the pub and that I wasn’t leaving until he did."

Caine did, and Nicola took a photo to capture the moment (above). Calne said:

"We had to get a photo of me going down on one knee in front of the police car after we got to the pub or no one would have believed what I’d done. We were only in the police car a short time, but the accident had put everything in perspective so I decided that I would ask there and then because anything can change in just a moment and I didn’t want to wait any longer."

"I didn’t have a clue that was going to happen. As far as I was aware we were going to Blue Anchor to take the dogs for a walk. In the car, Caine said ‘did you really think we were going all that way just to walk the dogs’ and pulled the box out. After the accident I was in shock and crying, people thought I had been crying because I was so happy that I was getting married but it was because of the accident."

The couple plan to marry next year.