A sawn-off shotgun, self-loading pistols and wartime revolvers are among 351 handed into Hampshire Police.

They've finished a two-week gun surrender, aiming to prevent firearms and ammo being used by criminals. Another they took in was disguised as a walking stick.

Another 300 were handed into Dorset Police (more on that below).

The Firearms and Ammunition Surrender started on 13 November, urging people to take the opportunity to hand in any unwanted or illegal firearms to police, so that they could be disposed of safely.

95 quantities of ammunition were also handed in across Hampshire.

Firearms included a number of working illegally held self-loading pistols and working revolvers from World War One, including two that were used in the Battle of the Somme (above). 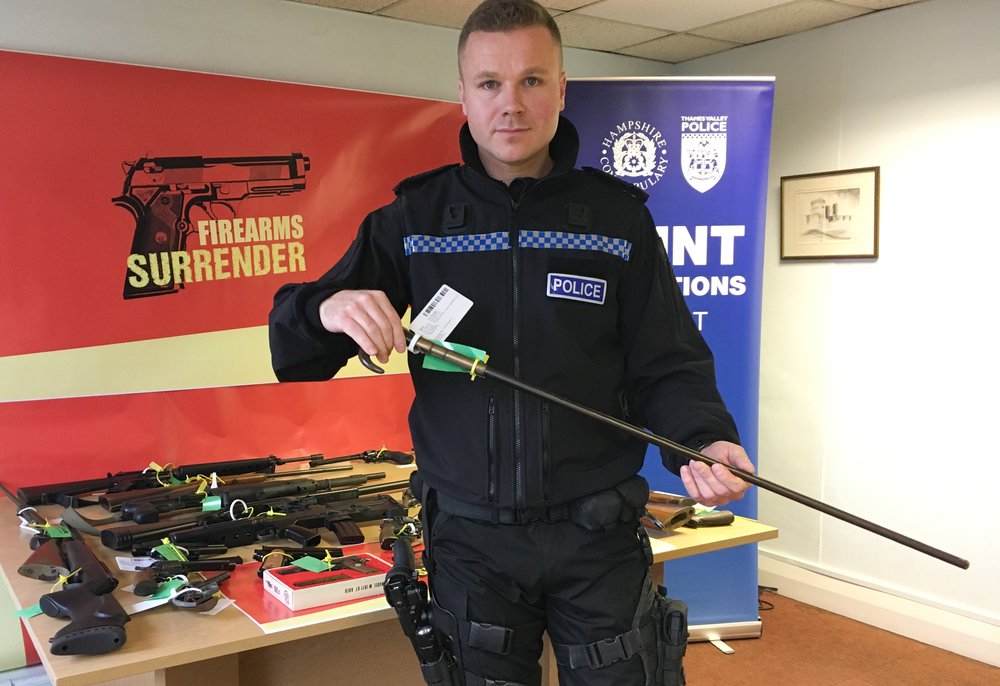 A number of illegally held shotguns, including a sawn off shotgun, were also handed in, as well as a revolver made in 1893, handguns, rifles and numerous air rifles and air pistols.

Other surrendered items include deactivated and imitation firearms and BB guns.

Hampshire joined police forces across the country to take part in the national campaign run by the National Ballistics Intelligence Service (NABIS).

During the two-week campaign, those surrendering firearms did not face prosecution for the illegal possession upon surrender and can remain anonymous.

However, this was not an amnesty and if further examination of a surrendered firearm reveals a link to a crime, this will be investigated.

"We would like to thank everyone who handed in any firearms or ammunition as part of this surrender.

"This means that there are 351 fewer firearms and imitation firearms on our streets which could have easily fallen into the hands of criminals.

"As a result our neighbourhoods are much safer, both for our residents and for our officers who work every day and night to protect them.

"We are very pleased that so many people took the opportunity to take part in this initiative and the number of firearms recovered certainly proves how valuable such a surrender is.

"Gun crime is low in Hampshire and the Isle of Wight and has not seen a rise others force areas have, however we cannot be complacent and we will continue to do all we can to make our communities safer."

Items surrendered to Dorset Police are as follows:

Michelle Mounsey, Alliance Firearms and Explosives Licensing Manager for the Devon & Cornwall Police and Dorset Police said a number of items handed in during the surrender will be subject to investigative testing. She said:

"As a result of this firearms surrender, hundreds of firearms and thousands of rounds of ammunition have been taken out of circulation within our communities.

"While not every firearm is owned with the intent of criminal activity, a firearm can become a lethal weapon in the wrong hands. The campaign was very much an opportunity for anyone to hand in illegal, unregistered or unwanted firearms or ammunition without risk of arrest at the point of surrender and while the campaign is now over, I would encourage anyone in possession of such a firearm or ammunition to continue to act responsibly and contact us for safe disposal in order to ensure our communities are a safe place to live."

"It's great that this initiative has been such a success. Many of these items, including imitation or deactivated firearms, can be perceived as safe. In fact, they still have the potential to cause harm in our communities and it is fantastic that these are now out of homes, off our streets and in the hands of the police. I would like to thank all those who engaged with this project."